Anyone into downloading music legally but without the annoying restrictions that come with most online music services may be interested to know that several Beefheart and Beefheart-related albums are available on E-Music now. E-Music offers top quality mp3s free of all DRM restrictions – you can copy them, keep them, burn them to CD, transfer them to a portable, delete them and download them again all at no extra cost. It’s also very reasonably priced. You will currently find the following Beefheart related items on E-Music: Grow Fins (essential Beefheart rarities box set from Revenant) 21st Century Mirror Men (excellent reformed Magic Band live album) END_OF_DOCUMENT_TOKEN_TO_BE_REPLACED 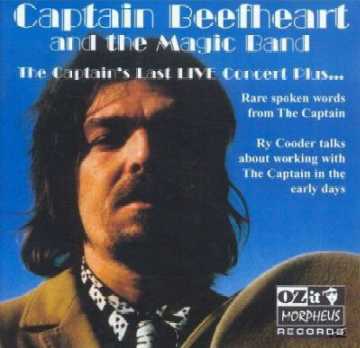 Ozit have released another Beefheart 2CD set. This time it’s a recording of the last live show ever played by Don and the band – the 31st January 1981 show at the Golden Bear. As usual with Ozit an opportunity has been missed. Find more info in our bootleg section here – http://www.beefheart.com/datharp/albums/boots/captainslast.htm END_OF_DOCUMENT_TOKEN_TO_BE_REPLACED 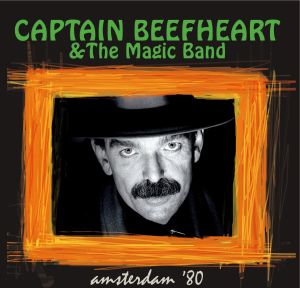 The second part of Derek Laskie’s interview with Herb Bermann, legendary writing partner of Don Van Vliet in the early days of the Magic Band is now available and is just as fascinating as part one. At one point Herb expresses his annoyance with something written about him in Mike Barnes’ biography of Don Van Vliet. I’m puzzled by his suggestion that Barnes should “do his homework” – I’d like to stress on the writer’s behalf that this is clearly a very well researched biography. Herb Bermann features only very briefly in the story which, despite his momentous contribution to one of my all time END_OF_DOCUMENT_TOKEN_TO_BE_REPLACED

A compilation CD, called The Buddah Years, has just been released based on the remastered Safe As Milk and Mirror Man Sessions albums. The good Captain also appears on a new compilation called Creative Outlaws – U.S. Underground 62-70. An interesting collection that includes The Fugs, The Stooges, Blue Cheer, The Great Society, Country Joe & The Fish, Tim Rose, Tiny Tim, and Lothar & The Hand People amongst others. The idea of the album is that the tracks are supposed to represent the preoccupations and ideals of the 1960s counterculture. The Beefheart track included is ‘Dachau Blues’ – an odd selection I would have END_OF_DOCUMENT_TOKEN_TO_BE_REPLACED

The Radar Station is very proud to present the first part of an extensive telephone interview with Don Van Vliet’s early writing partner, Herb Bermann. This partnership has been such a mystery for the last four decades that many have postulated that he didn’t even exist. Herb Bermann would like to happily confirm that he does exist and has spoken exclusively to Derek Laskie about his work with Don Van Vliet. Herb’s interview reveals a wealth of previously unpublished detail about the early history of Captain Beefheart and may well be the most historically significant item yet on beefheart.com for those trying to unravel the END_OF_DOCUMENT_TOKEN_TO_BE_REPLACED

I do not normally post information here without checking my facts. By doing so now I hope to save you some money and some grief. Adverts are now appearing for new copies of a ‘Lick My Decals Off, Baby’ CD. This album has been unavailable for too many years and is undoubtedly at the top of many people’s wish lists. My advice is to wait before you buy. According to one retailer, Rhino Records are to launch a Captain Beefheart Remaster CD and Vinyl Campaign in March and April. ‘Trout Mask Replica’, ‘Lick My Decals Off, Baby’, ‘Spotlight Kid’ and ‘Clear Spot’ will be issued END_OF_DOCUMENT_TOKEN_TO_BE_REPLACED 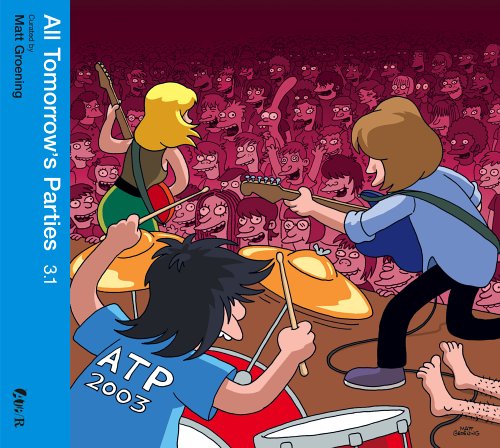 A recording of The Magic Band playing Dropout Boogie has been released on a CD compliled by Matt Groening, All Tomorrow’s Parties Vol.3.1. (ATPRCD16) Recorded in concert during a lunar eclipse over Long Beach California in 2003, this track has not previously been made available. Other artists on the album include Deerhoof, Elliot Smith and Iggy and the Stooges. Sonic Youth perform the Simpson’s Theme and a Matt Groening poster is included in the package. END_OF_DOCUMENT_TOKEN_TO_BE_REPLACED

Some previously overlooked performances by Don Van Vliet have recently been documented by Bill Lantz, one of the world’s foremost Zappa-ologists. In September 1975 The Abnuceals Emuukha Electric Orchestra was put together to present a series of orchestral pieces written by Frank Zappa. Michael Zearott was the conductor and Frank produced and recorded most of these shows. Forty musicians were assembled by Zappa with help from Earle Dumler and Mike Altschul. One of the orchestra members was Don Van Vliet who played soprano saxophone. If anyone has access to recordings from this project we’d be very interested to hear them. View the full story. Thanks END_OF_DOCUMENT_TOKEN_TO_BE_REPLACED

I recently received a message from John Drumbo French to update me on progress with his new recordings: So here Rockette and I are at Proper Record’s wonderful new studio recording my new CD “City of Refuge” which is basically a Magic Band influenced compilation of music I’ve put together over the last year and a half. I’m listening to Rockette put a bass line on a song called “Maybe That’ll Teach Ya” which is based loosely on a jam that was done by Don, Doug Moon, and myself. I used the Moon riff and Don’s line “Maybe That’ll Teach Ya” and wrote a whole END_OF_DOCUMENT_TOKEN_TO_BE_REPLACED

At long last! I’m pleased to announce the re-opening of the bootleg section of the discography. A lot of re-coding, re-arranging, and rewriting has gone into making this a bigger and better feature than it was before. However, it’s not completely finished … I’ve still got a few pages I’m working on but I thought as I’d done the bulk of it I’d make it available. As with any other pages on the Radar Station if you have any info you can add, or found something that needs correcting please get in touch. END_OF_DOCUMENT_TOKEN_TO_BE_REPLACED

This issue of Mojo (November) has a buyers’ guide for Captain Beefheart featuring a readers’ top ten of all his albums: Trout Mask Replica Clear Spot/Spotlight Kid Lick My Decals Off Baby Doc at the Radar Station Dust Blows Forward (compilation) Strictly Personal Safe As Milk Grow Fins (compilation of unreleased gems) Shiny Beast Mirror Man Safe As Milk would appear higher than that in my top 10 of any albums, not just Beefheart, and I’m surprised at the poor showing of Shiny Beast, another firm favourite of mine. This is something which Warner Brothers/Rhino should take note of: people would like to be able END_OF_DOCUMENT_TOKEN_TO_BE_REPLACED

Big Eyed Beans From Venus, that bunch of Beefheart botherers from Athens GA, have announced another two dates for their ongoing assault on the auditory senses of that city. They play the 40 Watt in Athens this Wednesday, the 14th, and play there again on October 8th when they open for the Circulatory System (friend of theirs from Olivia Tremor Control). There are still audio links to their Beefheart covers at MySpace. But when will they get out of Athens and start touring? END_OF_DOCUMENT_TOKEN_TO_BE_REPLACED

A Mongolian “throat-singing heavy rock band”, Yat-kha, have released an album of cover versions featuring Captain Beefheart’s “Her Eyes Are A Blue Million Miles”, along with tunes by Joy Division, Bob Marley, Kraftwerk and Hank Williams. A recent article in The Independent newspaper said: Kuvezin’s growling vocal harmonics emerge from his deepest regions, resonating around the changing shape of his mouth-cavity. In the case of Captain Beefheart’s number, this is not too far removed from its original practitioner’s approach, but these techniques sound quite startling when imposed on the likes of “Man Machine” and “When The Levee Breaks”. You can hear a couple of mp3s END_OF_DOCUMENT_TOKEN_TO_BE_REPLACED

I’ve recently received news of an exhibition which has just opened in Glendale, California, featuring the original artwork from Captain Beefheart’s Strictly Personal album cover Revolutions, a ground-breaking free exhibit that features the artists behind the images synonymous with identifying the pop culture of the 60s and into the new Millennium, opens July 31st at the Forest Lawn Museum in Glendale. Showing never-before-seen art and original creations, from photographs to posters, original artwork used for albums and CDs, magazine art and drawings, the exhibit showcases artists who created visually beautiful and thought-provoking work cherished by the world’s musical icons. This unique exhibit is a reflection END_OF_DOCUMENT_TOKEN_TO_BE_REPLACED 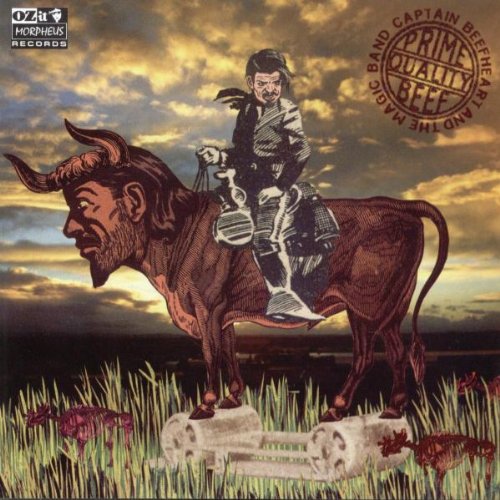 I’ve learned by now not to hold out too much hope when Ozit release another Beefheart CD. But this time they’re taking the piss … ‘Prime Quailty Beef’ … for heaven’s sake, Ozit, get a grip. This is second rate stuff even if it is decent sound quality (although, at least that’s an improvement on your usual shoddy sound). But ‘Sweet Georgia Brown’! … By no stretch of the imagination is that ‘prime quality’ anything let alone quality Beefheart. So what do we have here? Well, it’s the Crazy Little Things (semi-legitimate release) CD of the 1974 Cowtown, Kansas show (including the two versions of END_OF_DOCUMENT_TOKEN_TO_BE_REPLACED