By: Derek
In: Music, New releases
With: 2 Comments 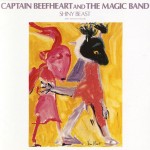 Our competition to win the 5 sets of EMI/Virgin’s remastered Captain Beefheart and the Magic Band CDs attracted hundreds of entries from around the planet.

It’s heartening to find out that in over 20 US States, in Canada, New Zealand, Australia and South Africa, in the Middle East and right across Europe and Scandinavia there are so many men and women with enough interest in Captain Beefheart to take part. Everybody answered the question correctly so congratulations all round, and thanks for all the complimentary remarks about this website and the work which goes into it.

The title of the Don Van Vliet painting which is reproduced on the front cover of ‘Shiny Beast (Bat Chain Puller)’ is of course Green Tom.

Jackie O’Neill, Alan Saul, Stuart Boros, Eric Hasler and Paul Mountford were the five contestants whose names were pulled out of the hat and EMI/Virgin sent off their prizes today.

I think EMI deserve a big thank you, not only for making this competition possible but for having enough commitment to the music of Captain Beefheart and the Magic Band to relaunch these albums in the way they have. Well done.

By the way, why is the painting called Green Tom? I’ve been asking around without success. Do you know?