Getting these Decals licks off, baby

By: Derek
In: Music, Tributes
Tagged: Lick My Decals Off Baby
With: 0 Comments 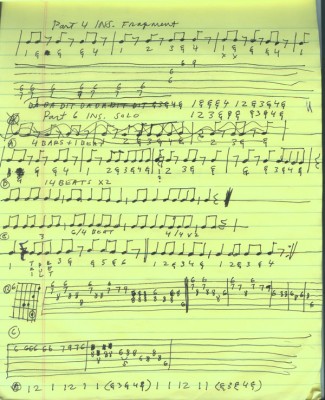 Weba Garretson, the group’s vocalist, promptly responded with an an engaging account of their work on the piece and included a scan of part of the transcription they used (click on the image for a readable version).

[wp_quote]Decals is an evolving process for us. The version on the CD is similar to the rehearsal, though it sounds quite a bit better on the CD….however the arrangement keeps evolving as we perform it. The groove section at the end “this song ain’t no sing song…” has gotten longer, Joe has added another riff on the guitar and now we have tenor sax and the ending has become a jumping circus blues…

Beefheart relates to Puttanesca because we’re into writing songs that use noise, dissonance and angular harmonies but are rooted in the blues….I guess you could call it the “abstract blues.”I saw Beefheart when he played the Whiskey in 1981 and he’s been an inspiration ever since. I loved the way he went from being an excellent blues singer into this Shammanistic character.

As far as Lick goes, it took us a while to figure it out as a group. How to count the song was the big challenge for us. Where is the one? and then the bridge section, with all it’s variations of 2/4, and 6/4…we were completely confused until Joe Baiza (the guitar player) sat down and wrote the whole thing out, note by note…and then the lyrics…the way Beefheart delivers them in a voice that swings up and down…it took me a long time to figure out a way to sing in my own way. I didn’t want to imitate his delivery. When I understood what he was saying, about the totality of desire “I wanna swallow you whole….everywhere it’s pink…” and that the song wasn’t merely salacious “this song ain’t no…” I started to get a clue. There’s a comical tone to his voice, but what he’s saying is very serious. For me that’s the key.

I think what we’re really enjoying at this point is discovering the organic thread that goes through the whole song and makes the very distinct sections flow together. that’s a point you can only reach by playing it over and over again. We plan to do another video soon, keep updating people on our progress. We’re having fun.[/wp_quote]

Puttanesca’s CD, Puttanesca, is issued on Catasonic Records. Lick My Decals Off, Baby is one of 11 tracks on the CD which combine an angular jazzy instrumental structure with Weba Garretson’s rounded sexy vocals. Sample tracks can be heard at Puttanesca’s MySpace page, at their website and at CDBaby.