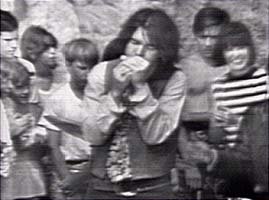 Film of Captain Beefheart and his Magic Band performing Diddy Wah Diddy and Who Do You Think You’re Fooling was broadcast on Dick Clark’s television show Where The Action Is on 24th May 1966. Shot on location at a Californian beach Captain Beefheart’s sexy glowering beatsters played their music to an audience of gyrating valley girls and boys.

This film is a joy to watch, so now that it has been pulled from YouTube for being used without permission we can only hope that Dick Clark Productions, Inc., the copyright owners, have plans to let their film be more widely seen elsewhere.

Since this piece was written the film has reappeared on YouTube … not great quality but still a joy to watch : https://www.youtube.com/watch?v=BCLnoBSh5kk

Film of Captain Beefheart and his Magic Band’s first television appearance may also still exist. They played on a programme called 9th Street West which broadcast live in Los Angeles on 28th April 1966, shortly after Diddy Wah Diddy was released. Tapes of this show were produced for syndication but none have yet resurfaced.

Gary Marker tells the story of how this performance degenerated into a very messy slapstick between Don Van Vliet and the TV host Sam Riddle (see Gary’s story below). 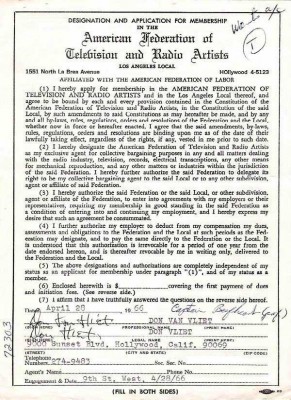 A newly discovered contract relating to the 9th Street West TV show is currently being offered for sale by former Warner Bros executive Jeff Gold. This contract carries two different signatures by Don, one as Don Vliet and the other as Don Van Vliet. Because of this, Jeff considers it to be a unique document and prices it accordingly. 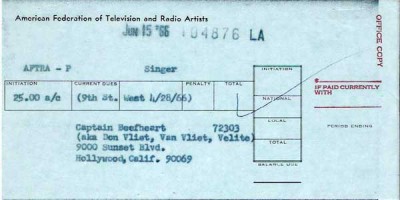 Velite? Don Velite? That is unique too, although it is almost certainly only a typo. Gary Marker wrote to me about the organisation which issued the receipt, “….my recollection of the office staff at AFTRA back then is, if their brains were dynamite their eardrums would be in no potential danger. They once cut a check (or “cheque”) to me as “Gerry” Marker.”

Jeff Gold’s Captain Beefheart contract and receipt are for sale at recordmecca.com

A less well known Captain Beefheart appearance was on American Bandstand, another Dick Clark television show, which broadcast on 18th June 1966. The programme had performances by Love and Steve Alaimo plus a telephone interview with Don Van Vliet. See it on YouTube – https://www.youtube.com/watch?v=XFfKWfJ8Tc8

[wp_quote]Back when “Diddy-Wah-Diddy” was released, Don and the band did the mandatory lip-synch appearance on a local L.A. teen dance show called “9th Street West.” It was hosted by an annoying, smarmy, miniscule, super-hyper DJ named Sam Riddle. Riddle’s usual M.O. was to schmooze with the artist for a bit of time, either before or after their on-air performance–usually by asking a lot of inane questions. (He once actually asked Doug Sam, when “She’s About A Mover” was chart-bound, “How many of you are there in the Sir Douglas Quintet?”)

So anyway, back then no one knew that trying to interview Captain Beefheart was, at best, a shaky proposition. What happened was (and keep in mind that this was LIVE TV), after the Magic Band had finished their lip-synch, Sam Riddle came bounding up to Don, carrying a huge wad of white, waxed butcher’s paper. “Captain Beefheart, Captain Beefheart!” he was yelling in his usual helium-drenched hyper-voice. “Look what I’ve got for YOU!” And with that, he whips open the butcher’s paper, revealing a gigantic, wet, raw genuine beef heart–which he shoves up toward a startled Don Van Vliet’s face. “It’s a real beef heart! Whaddya think of THAT, Captain Beefheart?” he squeaked.

Without a second of hestitation, a now very angry DVV snakes his arm out, grabs the raw beef heart in his bare hand, holds it over Riddle’s head, at which point the munchkin-like host starts backing away quickly. But not quickly enough. “What do you think of THIS, Sam Riddle?” Don growls, giving the heart a hefty squeeze. Bloody beef heart juice squirts, drools and dribbles all over Riddle’s trendy pastel suit, with some overspray on his thick facial make-up. “You gotta lot of nerve sticking that ugly thing in my face,” Don mutters, while Riddle smiles like an imbecile and announces a breakway for commercial a couple minutes ahead of schedule.[/wp_quote]

Needless to say, Captain Beefheart and his Magic Band were never invited back for another appearance on that particular TV show.

Gary wrote a caveat to the above story.

[wp_quote]The appearance I documented was a live, real time event, broadcast only to the LA area. They also taped the show for syndication across the country. When I told friends of mine in other cities to be sure and watch Beefheart’s antics on the show, most reported back that the pivotal moment wherein he douses Sam Riddle with beefheart juice wasn’t there; it had apparently been edited out. So, if any tapes of that particular show still exist, it’s a rather tame version and the best moments of the encounter are missing. But it really happened, I saw it with my own two eyes, and so did a lot of other people in Los Angeles.[/wp_quote]

Thanks to Jeff Gold for permission to use his photographs and to Gary Marker for his generous help.