The first release on this label named by Don and set up by the producer Bob Krasnow who had also been involved with the production of Safe As Milk.
Very thick card gatefold sleeve. Two different issues (that we know of): 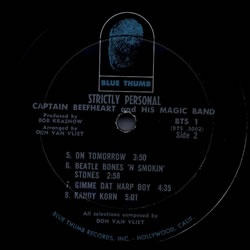 Jim Neher wrote to pass comment on the quality of the different releases:

Next to the black label banded version, the black label unbanded version sounds dull, and actually like it was copied from vinyl rather than from a master tape. On the banded version, the sound in “Safe as Milk” after the words “popup toaster cracklin” stands out sharply, sounding to me like a matrixing defect. (In the unbanded version, the top treble is missing, causing that sound to be blurred in as if it were deliberate.) I assume it is rare – my friend got it in New England in 1970. Even after being played to death, it sounds better than any other vinyl copy I have heard. It was a source of great frustration to me that he had good-sounding copies of Safe as Milk and Strictly Personal, and that I had to make do with inferior versions that were then in the stores. These were our two favorite albums, next to Trout Mask.

By this time the label had been taken over by Capitol Records.
The label is similar to the earlier tan versions (without the ‘A Subsidiary of..’ details) but is much paler – closer to cream or ivory in colour. The album includes the standard gatefold cover but with a NEGATIVE version of the photograph inside! 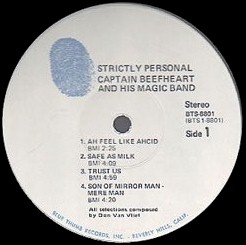 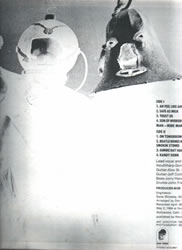 Thanks to David Naughton for the scans of this one.

Additional comments on the quality of the different US Blue Thumb releases from Steve Froy:

I also have a black label banded copy of the Canadian pressing which sounds better than most other versions.

Gatefold yellow-brown sleeve, same as US issue, but on much thinner card. However, it looks like some of the earlier UK and European issues were released in thick US sleeves with the addition of a Liberty sticker on the back (see scan of example below) 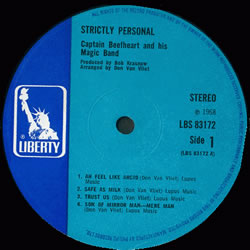 Thanks to Mats Hulden for these scans.

Additional comments on the Mono version:

Jymn contacted us to to enthuse about:

…the monster that is the mono version of this album. It’s the wildest, loudest, lowest, most terrifying album in mono. 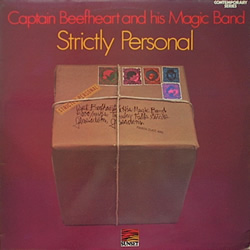 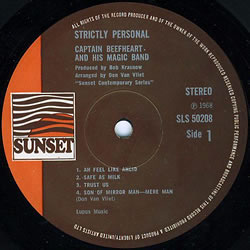 Thanks to Simon Smith for this scan.

Another budget issue in November 1979 with different again artwork.

I have seen this album sold as being “without phasing”. This is nonsense … the phasing is still there. The sound quality overall is very good. 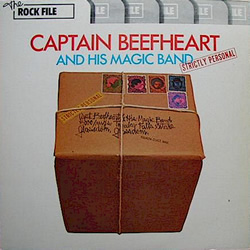 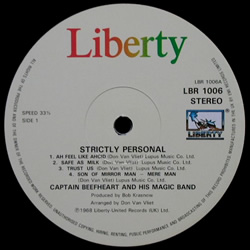 The Canadian issue is exactly the same as the original release however Polydor Records undertook the distribution. “DISTRIBUTION: POLYDOR RECORDS CANADA LIMITED” is printed on the bottom right edge of the front cover and on the inner sleeve below the other text. As can be seen below the label is black with “MADE IN CANADA” printed at the top and “POLYDOR RECORDS CANADA LIMITED” at the bottom.

Great sound quality on this pressing. 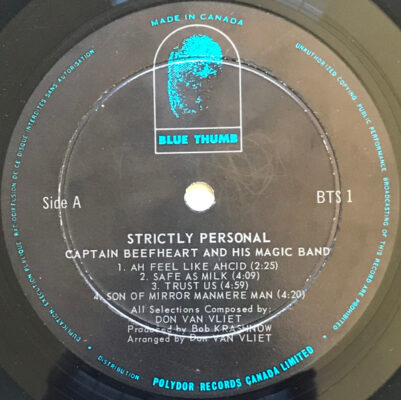 The front and back of the sleeve are the same as the original release but it is not a gatefold. The track list has been added to the back on a blue label.

The record label is a black and white version of the UK one but says “LIBERTY RECORDS INC. LOS ANGELES, CALIFORNIA”. 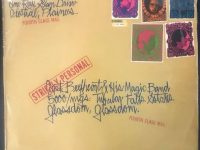 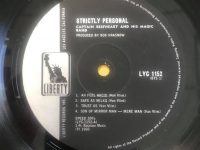 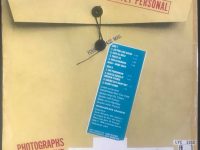 Thanks to Paul Dickinson for the photos of this unusual version.

Sleeve is similar to the Sunset and File series ones but is a different closer view of the parcel. Back has sleeve notes by Paul Alessandrini taken from 1972 Rock & Folk 64/65 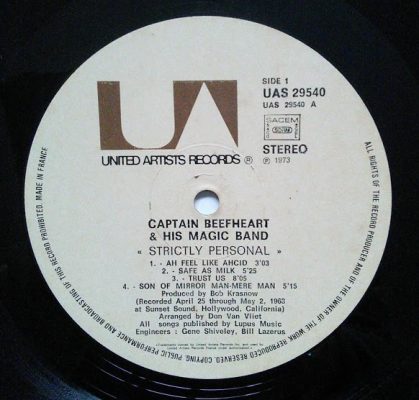 Strictly Personal has been issued on CD in the UK by EMI (7243 8 29654 2 8) – it appeared in UK shops round here in mid July ’94. The packaging is really excellent – the CD booklet is like a mini version of the original 1968 gatefold sleeve with the 25th Century picture in the centre and all the right credits/dates intact. It comes with about 2000 word sleeve notes by Mark Paytress which are also pretty good. The Ry Cooder connection which appears in the adverts is due to a mis-reading of these notes – Mark was talking about Ry Cooder’s involvement in Safe As Milk.

It is a Budget CD and the sound is pretty well the same as the original UK 1968 issue (which was the best sound/pressing), the 1971 Sunset re-issue and the 1979 Rock File re-issue. It doesn’t claim to have been re-mastered even though the unphased version is extant in Culver City, LA (discovered by Roger Armstrong of Ace Records who told EMI about it).

I have tested it against the vinyl and there is little difference. Unphased tracks (like “Gimme Dat Harp Boy”) sound better and crisper while phased tracks (like “Mirror Man – Son of Mere Man”) sounded worse to me as the phasing is more apparent – I guess digitising adds emphasis to these effects. However the shocker for me was that on “Kandy Korn”, the last track, as the final crescendo is reached there is this wild yell in the background which definitely cannot be heard on the vinyl!

All together a pretty good release and I still think that someone may dig out the pre-phased version in some future release – it would be nice to hear this with the clarity of the UK Sequel “I May Be Hungry” CD which was taken direct from the November 1967 master tapes. 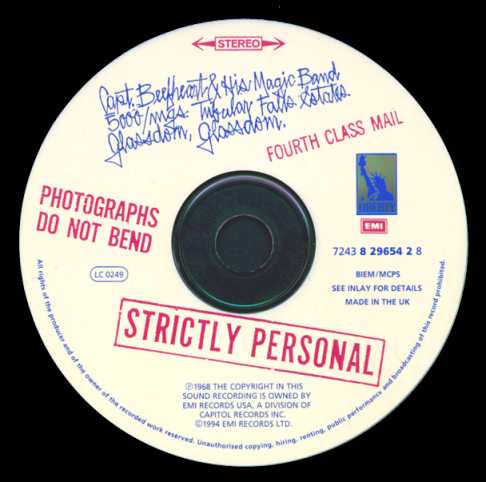 This CD contained 11 “unphased” tunes from the Strictly Personal sessions. View full I May Be Hungry But I Sure Ain’t Weird info.

1999 Safe As Milk – reissue with bonus tunes. This and the following release contained all the I May Be Hungry tunes plus Korn Ring Finger.