I May Be Hungry But I Sure Ain’t Weird discography 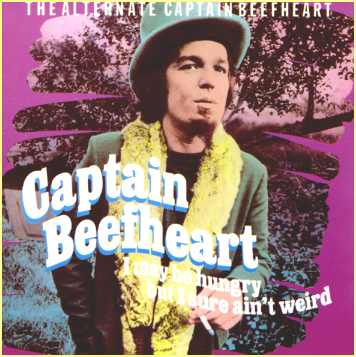 11 digitally remastered tracks recorded between October 1967 and May 1968 – missing only “Korn Ring Finger” from all known Strictly Personal cuts.

The CD was compiled and annotated by John Platt.

Note that track 11, “Dirty Blue Gene”, is actually an early version of “Ice Rose”, from the 1978 album Shiny Beast (Bat Chain Puller). “Dirty Blue Gene” was the actual label on the original tapes, so the labelling on the CD is correct. The Magic Band often swapped song-titles around, as must have happened here.

No longer available. However, all these songs (and the missing “Korn Ring Finger”) are readily available on Buddha’s excellent 1999 releases of Safe As Milk and The Mirror Man Sessions.

Reworked front and back cover with the 11 song titles in Japanese and English. Has Manufactured and Distributed by TEICHIKU RECORDS CO.,LTD. Japan on back. Appears to be issued January 21st 1993.