Ever since Don started complaining about the ‘bromo seltzer’ that had been added to the Strictly Personal album fans have wondered what it would have sounded like without Bob Krasnow’s pyschedelicized production.

Surely the pristine untreated master tapes were tucked away in storage somewhere people thought. Not so. Gary Marker said that it was highly unlikely because Krasnow had used the master copy for all the phasing etc. he had added to the album’s sound which meant the original raw recording of the band was lost.

Over the years various collections of alternate versions of many of the Strictly Personal songs have turned up and been released – the I May Be Hungry But I Sure Ain’t Weird CD for example. These alternate takes have been free of any of Krasnow’s major tampering giving some indication of what the album might have sounded like.

Most fans will have accepted that this was probably as close as they would ever get to an ‘un-phased’ version of the album. Although the master tapes may no longer exist there does still seem to be one slight glimmer of hope … there does exist an acetate of the album which may have come from a tape dubbed from the master before all of the ‘bromo seltzer’ was added.

The story of the acetate goes something like this…

When the band toured the UK for the second time in 1968 Don brought with him a ‘rough mix’ tape of their new album, Strictly Personal, which they’d just finished recording. This tape was shared with John Peel who was allowed to share it further with his friends at One Stop Records.

Based in South Molton Street in London One Stop Records was THE hip place to get all the latest records of the hottest new bands of the late 1960s and early 1970s. They specialised in supplying imports of the best new US bands making their albums available weeks, or even months before the album was officially released in the UK. (It’s where I bought my import copy of ‘Strictly Personal).

The guys at One Stop took the tape to IBC Studios where they had three acetates produced. One for themselves, one for John Peel and a third which went to a regular customer at the shop and Beefheart fan.

It’s likely that it’s this acetate that Peel used as a reference for his review of the album in IT in October (see Peel’s review) and presumably it still resides somewhere within his huge collection.

What happened to the One Stop version I have no idea.

The third copy however turned up on ebay in November 2011 where it sold for 1312 Australian Dollars, and then again in March 2012 when if it sold for 699 US Dollars. I understand it may have been sold again since, probably privately but was damaged at some point in transit.

It’s tantalizing, and not a little frustrating, to think that this has been around all that time and none of the owners have considered offering it up for legitimate release. One of the discs may now be damaged but there are possibly still two copies out there somewhere!

I have not heard what’s on the acetate so I cannot comment as to whether it really is the version that all Beefheart fans would love to hear. If it is the copy that Peel used for his review then it does have some of Krasnow’s production on it as Peel does mention phasing, backward sections and other ‘distortions’ in his review. It’s possible it might be a slightly ‘cleaner’ version than the released mix. A few people know but so far they’re not saying …

Below is a scan of the label of side one of the acetate. Note Mirror Man is not listed as ‘Son of Mirror Man – Mere Man’ 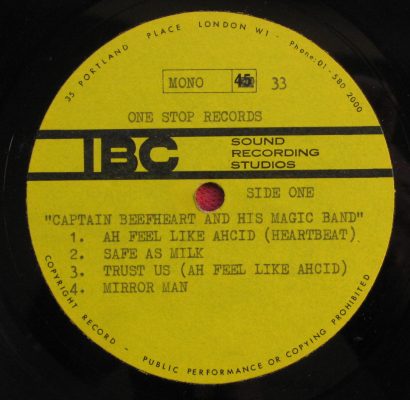