Strictly Personal – reviews and ads in IT 1968

From John Peel’s ‘Perfumed Garden’ column in the legendary sixties ‘hippy’ newspaper IT (International Times). This review of Strictly Personal takes up half of the column space and appears to be based on an acetate version given to him by Beefheart himself – this would have been during the band’s tour of the UK in July 1968.  Other bands mentioned by Peel after this review included Duster Bennett, MC5, Principal Edwards Magic Theatre, The Liverpool Scene, Bridget St John and Brian Jones.

The autumnal air is heavy with promise – a new Beefheart LP is on the way. Perhaps by the time this is read it will be in the import shoppes.

Following various hang-ups with established and short-sighted record companies the Magic Band’s guiding light, Bob Krasnow, has formed his own company. The label is Blue Thumb and the LP is to be called ‘Personal’. I hope the LP is the same as the acetate the wondrous Captain gave me, about which I’ll tell you now.

The opening track is ‘Ah feel like ahcid’ (meaning ‘I feel like I said’, not what you were thinking, hey hey). This owes a lot to Son House’s ‘Death Letter’ (CBS Sbpg 62604 – it’s another informative article) and features a sort of Mississippi Don van Vliet backed only by the bottleneck of Alex St Clair. The words differ somewhat from the Son House version, for example, Son House doesn’t say ‘the postman’s groovy’.

‘Safe as Milk’ is the second track. Great stomping Beefheart which prominently features the thunder-drumming of John French. ‘Children running after rainbows’. A very tribal feeling to this as to much of Beefheart’s live stuff. Nice sounds from Alex and rhythm guitarist Jeff Cotton. Slow portion with random slide noises and strange stick-insect drumming. Phased thunder train. This is such good stuff, I weep for those who don’t know it. Chris Welch said the Magic Band were the worst band he’d ever seen play – I’ll say they’re the best.

If I have to tell you what it is about Beefheart then you won’t care. This is not to make it into some strange esoteric thing that only initiates can understand. When they play, half the audience leaves, half that remains grow bored – but we survivors really enjoy. Beefheart live, for me, is a sort of magico-religious purification. That looks so stupid and pretentious (trendy word) but it’s true. I feel purged. That power they generate, uncompromising, heavy and totally true. If they come here again, leave your pre-conceived notions of what a group should sound like in the hazy comfort of your own acreage.

‘You gotta trust us’ is their ‘Five to One’. When it all comes down to it the malevolent forces – those who oppress us on every level from the mad (and that really is madness) politicians to the sad-eyed envious shufflers who still call out when you walk past – they are going to die before we do. They may take some of it with them but if you can stay pure, and straight and as good as you know, then we’ll make it in the end. Try to hear the words. ‘The path is youth, let the dying die, let the lying lie’. Snake rhythms flood over the head and everything swirls backwards into a reprise of ‘Ah feel like ahcid’.

On stage much of the ritual tends to be built round ‘Mirror Man’ and versions of ‘You’re gonna need somebody on your bond’ (Blind Willie Johnson). On the LP it’s ‘Mirror man’ – hugely heavy atmospheric drumming and some very strange effects and effective vocal distortions. There are times when I think Don was intended for another planet – his music is certainly extra-terrestrial. He plays harmonica on this, his voice blending with it in swirling cries from the chaos. I’m looking forward to reading the reviews of this LP in the popular papers.

‘Tomorrow’ starts side two of ‘Personal’ (this is if this is the LP they are releasing – I shall look even stupider than usual if it’s not). Another heavy track with other members of the Magic Band joining in on the words. Falls into the random sliding thing again with backwards tapes and it goes straight into ‘Beatle Bones ‘n’ smokin’ stones’ which they did for ‘Top Gear’. More curious vocals from the Captain and intergalactic guitar phrases. Good uses of pauses and stereo – as usual concentration on the lyrics is a good idea. Ends on gargled ‘Strawberry Fields Forever’ and feedback fade.

Perhaps the most acceptable track to play to those unfamiliar with the group would be ‘Harp Man’. Basically a Beefheart-Diddley-blues blow (how’s that for a detailed analysis of the unanalizable (a new word). Frenzy harmonica with the sort of repetitious lyrics that some dismiss as banal – they’re wrong. A lovely riff runs through this and Don does sort of Roland Kirk things through the harmonica. Good strong work from bassist Gerry Handley. This really is a masterly LP. You can’t compare/relate it to anything else. Take it somewhere clean, surround yourselves with those you love and listen again and again.

Non choral opening to the final track, the marvellous ‘Kandy Korn’ named after a particularly unpleasant American confection (and they really know how to mass-produce waste materials and sell them to the bewildered over there). Really not much singing on this. Moves early into a long and lyrical guitar fade-out with Don singing the title very deep and slow behind in a complete fog of sound. Sadly Captain Beefheart and the Magic Band go virtually unknown and unacknowledged in America – I don’t know how much longer this can go on come to that – but they must start to hear soon.

The record ends with ‘I ain’t blue no more. like heaven, like heaven ah said. Me too. 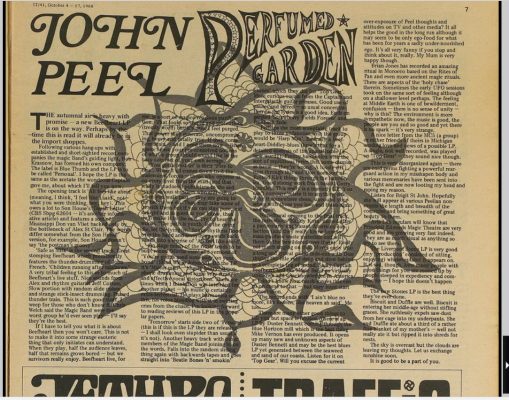 An advert in IT from THE import record shop at the time – One Stop Records. I bought my import copy from here by mail order: 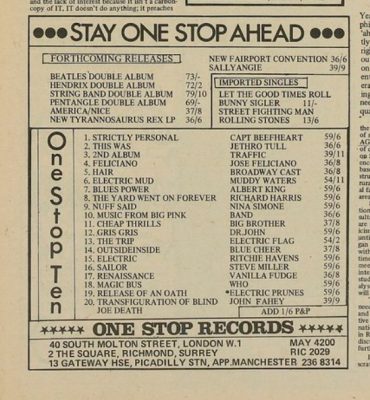 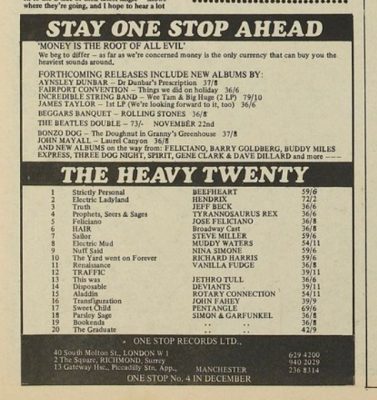 From the record review column written by Miles. This would have been based on the US import that had been available for a few weeks in the UK. However the UK release of the album on Liberty Records was due on 6 December 1968 :

By Peelian command we review CAPTAIN BEEFHEART AND HIS MAGIC BAND – STRICTLY PERSONAL – Blue Thumb S1. How wise he is! Do you remember ‘Dropout Boogie’ from Safe As Milk? The Captain’s high  moral tone. That track particularly signifies the direction the magic is moving in and is magnified in Strictly Personal. It is the kind of music you’d expect 1950’s Martians to play in their Flash Gordon UFOs or back on the ol’ Red ‘un (shades of Dan Dare and Digby).

When Kandinsky first saw one of his paintings upside-down he liked it, thus discovering abstract painting. ‘Taste’ was once a barrier preventing artists from using discordant colours together (yellow against purple – Arp maybe fixed that one). So music has the same restrictions. In Jazz Ornette disposed of time, Cecil Taylor got past melody easy enough, The Ayler Bros. collaged thematic structures and discord in a new way.

The magnificent Captain introduces collaged blues/parody (fragments) in breathless Southern style and disposes with the outmoded concept that all instruments have to play in the same key in a group. (Muddy Waters on ‘Electric Mud’ Cadet LPS 314 does this also, possibly accidentally on ‘She’s Allright’). John French on drums uses superimposed time signatures (heart-beat on one) giving a complex spatial texture. To all those hailing ‘Music From The Big Pink’ by the Band as a breakthrough in ‘some cats just getting together and making an album’ (cult of the amateur) consider a) the highly professional production of Big Pink and b) the relaxed human, intimate qualities of ‘Strictly Personal’ which, as its title suggests, is music of great personal expression and with little commercial consideration given.

The art of phasing is taken to a new high in ‘Trust Us’ with more amazing drumming from John French. Someone plays a little tune with feedback as well, showing exceptional skill and virtuosity with the whistles and squeaks. ‘Mirror Man’ opens with fine control, great subtlety and beauty. This track is particularly fine for bass and also guitars, listen to them separately. the ‘talking’ bass style and phased voice and harp turn from electric blues to a ‘recorded live in the cotton warehouse’ scene on a scratchy wax cylinder ending with a dopple effect hiss which is both evocative of ‘the black wax’ and Buddy Bolden, or advanced fades of electronic Hendrix.

On ‘Gimme Dat Harp Boy’, in the manner of Howlin’ Wolf. listen again for the togetherness of bass and drums ( a ‘Them Bones’ sound pattern) As ‘H’ points out, many of the new ‘blues based’ and West Coast groups have a sterile sound in which self centred virtuosity becomes the dominant motivation leaving the sound emotionally (humanly) void with no blue orgone crackling at all. (A new formalism – the danger of cybernetic society).

The Magic Band are an exception, with roots in blues and Rock and Roll. Listen to the treble solo ending ‘Kandy Korn’ – a rich surface texture but with many little eddies forming a heavy substructure through repetition. The album ends with a tribute to the eternal blues singing man. The line up on Captain Beefheart is: Don Van Vliet (voc. harp); Alex St Claire (gtr); Jeff Cotton (gtr); Jerry Handley (bass); John French (drums). The line up on their first album was not given.

An advert for the upcoming release on Liberty: 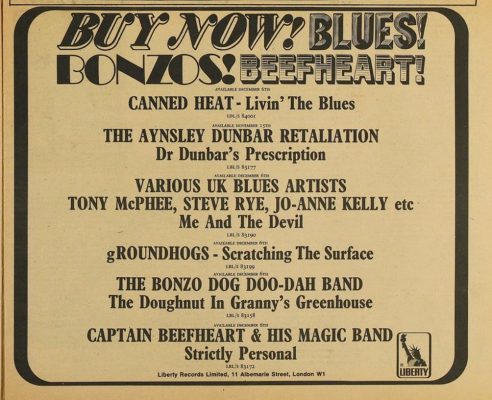