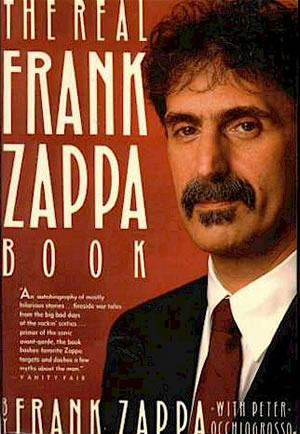 Synopsis from the flyleaf

Zappa offers his initimable views on just about everything: art, politics, cigarettes, beer, televangelists, symphony orchestras, lead guitarists, groupies, the PMRC, marriage (as a dada concept), and the history of rock and roll.

Not so much an autobiography more a collection of anecdotes in chronological order taped by Frank in answer to questions put to him by Peter Occhiogrosso who then typed them up.

There are plenty of rare photographs plus some great cartoon illustrations throughout.

As for the Beefheart content … Frank recounts his friendship with Don Vliet from their teenage exploits in Lancaster in the late 50s through to 1981 when they last met. The Soots, the Grunt People film, and Trout Mask Replica all get a mention. Although there isn’t a great deal of detail it still makes for interesting reading.