One of the first albums to be recorded on 16 track.

When I first bought this album I danced around my bedroom with glee while listening to it and then took it out with me that evening to force everyone else I knew to marvel at it too (a surprisingly mixed response if I remember rightly). It still gives me the same urge well over two decades later.

This is the Frank Zappa album that even non-Zappa fans like, and it is a corker. Mostly loud, swinging, instrumental electric jazz-rock with touches of psychedelia and blues. Immediately comprehensible complex melodies soar and toes tap along: it’s an unstoppable onslaught of Frank at his funkiest.

Although it’s a consistently stunning album I’m sure the highpoint for most listeners (regardless of whether they come from a Beefheart or Zappa background) is Willie The Pimp with its rocking swampy guitar and arresting Beefheart vocal. Full of sleazy grit and disgruntled gusto, Beefheart’s vocal is perfectly at home here.

Unmissable, as is the album artwork by Cal Schenkel. 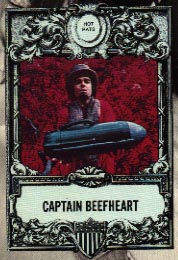 Beefheart as depicted on the inside of the gatefold album. A fitting setting.