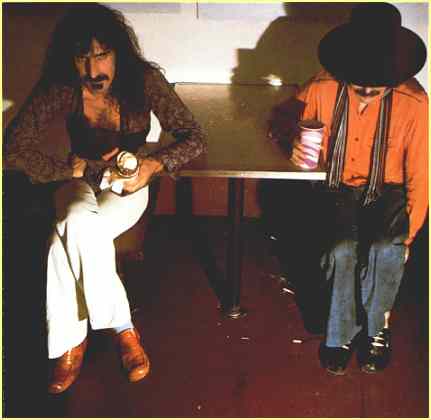 If you don’t like Zappa then this may not convince you to change your opinion in the way Hot Rats might. For me, Bongo Fury is a great purchase.

As Jimmy Carl Black pointed out, Don is the best singer that Frank ever had. However, Don is clearly more at home singing his own words than Zappa’s. This is most noticeable on the ploddy “Poofter’s Froth Wyoming Plans Ahead” which sounds mostly unconvincing and workmanlike.

The two Beefheart-penned tunes are as lyrically and vocally impressive as ever, and many of the Zappa tunes have some very funny moments. It’s a mostly winning performance.

This album came at a low point for Don – the Magic Band had left, the Tragic Band clearly didn’t work out, contractual problems obstructed new recording and there was a sense of drift amid rumours of alcohol problems. It’s hard not to feel Zappa was helping his old friend out here and although he’s unlikely to have seen much gratitude I’m sure the experience helped reinvigorate Don and prompted the triumphant Bat Chain Puller rebirth.

This is where his artistic comeback began.

View the Radar Station’s full information about the various editions of Bongo Fury which have appeared over the years.