Frank Zappa, Captain Beefheart and the Secret History of Maximalism by Michel Delville and Andrew Norris

By: Graham
In: By or about Don Van Vliet
Tagged: Andrew Norris, Frank Zappa, Michel Delville, Steve Froy
With: 1 Comment 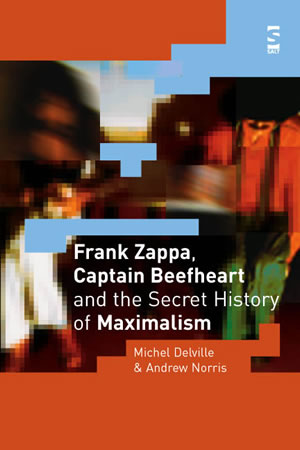 A comparative account of the musical and cultural acts of Zappa and his cohort, collaborator and antagonist Captain Beefheart. Written in the iconoclastic spirit of Zappa’s art, this book traces the mixed media experiments of California freakdom through the dada blues of Beefheart, mapping out the pleasures of imaginative excess.

This book is not another critical biography, but an interpretive essay investigating what we feel is the cultural and historical importance of Zappa and Beefheart in the context of a wide-ranging network of references that run from Michelangelo and Arcimboldo to William Burroughs and Vaclav Havel.

First up I have to say that I’m not a Zappa fan so am not as intimately familiar with his work as I am with Beefheart’s. This means a lot of this book doesn’t mean much to me. (If you’re a Zappa fan and want to send your review of this book please do. It would be interesting to get another viewpoint).

On seeing the book my first question was – what is maximalism? I’d not come across it before but presumed it was the opposite of minimalism – although isn’t that rococo or some similar over ornate style? It seems it’s not that straightforward. Take a look at the Wikipedia entry; it might help a bit. I came away with the impression that the word seems to have been borrowed from political science and is now trendy to use in relation to the arts.

Here’s one definition offered in the book, but this comes from Tom LeClair:

I think I can see what they’re saying about Zappa and how his work fits into their view of maximalism. There is some mileage in seeing Beefheart as maximalist from the wikipedia definition but I don’t see it beyond that. Mention is made of a definition from David Jaffe who says that “… the maximalist approach in contemporary music ’embraces heterogeneity and allow for complex systems of juxtapositions and collisions, in which all outside influences are viewed as potential raw material'”. To be honest, though, I don’t really understand what the authors are saying maximalism is.

Apparently, “when Frank Zappa and Don Van Vliet sat around after school eating pineapple buns and listening to rhythm and blues records, they were indulging in an early form of maximalist synaesthesia … buns and blues, the listening body eating, this was an auspicious beginning.” The use of food and bodily functions in songs by both musicians is a recurring theme of the book and seems to be a central pillar of the authors argument. Yes, they have something there but it could have made into a more interesting read

I’m not entirely sure why Beefheart has been dragged into this apart from the fact that his and Zappa’s names are never far away from each other in the musical world. The majority of the book is about Zappa and his work but it occasionally breaks off to discuss one of Don’s songs. The impression you get is that they think Don was a maximalist in some of his work by accident whereas Frank had a master plan of some kind. Which is fair enough as most fans would agree that Frank was the cerebral of the two.

All the sections about Don could be removed from the book without damage to its structure or argument. However, the authors would probably disagree:

[wp_quote]”In his assault on the ‘moma heartbeat’ and the sedimentation of form and response it imposes, Van Vliet seemed to be working towards a maximalist enhancement of possibilities; and his efforts in this direction have proved very useful to us in out attempts to show how musical maximalism incorporates its opposite, and how the meeting of extremes more generally is one of the vital blowholes of maximalist art.

“Even if finally not a maximalist himself, Van Vliet participates in and engenders a series of maximalist moments through his lyrics and musical ideas, his physical presence and bodily projections, his ego statements, and his shifts between the verbal, visual and sonic media. By examining some of these moments below, we hope to shed more light on Zappa’s developing art and the key ideas of maximalism …”[/wp_quote]

The authors admit that the book is not intended as an “exhaustive study of the music of Zappa and Van Vliet … but an interpretive essay investigating what we feel is the cultural and historical imporatnce of both artists in the context of a wide-ranging network of references …”.

Many of Don’s songs are discussed, mainly from Trout Mask Replica although songs from other albums make an appearance even ‘Sugar Bowl’ from Unconditionally Guaranteed. As with any attempt at deciphering the meaning of songs this is a very subjective business and will probably start you shouting at the book. But using ‘Grown So Ugly’ to back up any theory about Don is not valid because, one, Don didn’t write it and, two, it was Ry Cooder’s insistence that got it on the album. The words to ‘Electricity’ were written by Herb Bermann which makes that song ineligible too.

There’s an interesting piece about ‘Dachau Blues’. The point is made that this is either a very brave attempt at something different or a horrible mistake – I think most fans might agree it is one song on Trout Mask that is different in tone to all the others and can be quite disturbing.

The writers are academics and this book was written with other academics in mind. There are too many multi-syllabic words end to end in lengthy sentences causing this reader to drift off into his own reveries and lose the sense of what little he’d managed to grasp from the preceding sentences. Stay sharp to make any sense of this book!

I read a lot and will devour books I like in a very short space of time. But I have to admit that I struggled to get through this one. At one point I put it down and didn’t get back to it for another month. I didn’t even take it on holiday with me, preferring a bunch of other stuff instead. Yes, I found it hard work to finish. It’s academic in tone and language and as such makes comparisons with things most people have never come across before. There are some interesting ideas in here but the complex text gets in their way which is a pity.

I’m sure Don would be appalled that such discussion of his work exists and would undoubtedly say that the authors had had ‘too much to think’.