By: Derek
In: Tenuous
Tagged: Frank Zappa
With: 6 Comments 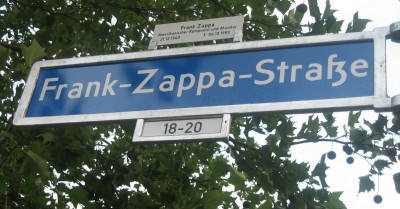 According to Gary Lucas in a 1996 interview for Seconds magazine, Frank Zappa and Don Van Vliet’s last meeting was embarassing and distressing. Frank owned the rights to Bat Chain Puller, tracks from which Don wanted to use on Ice Cream for Crow. After some fruitless negotiation Don and Gary decided to confront Zappa face-to-face and ask for the use of the material. Zappa refused, saying, “Unless you buy all the masters back from me, it’s not worth it for me to split up the set. It won’t be worth that much out there in Beefheart-land.”

Frank Zappa is generally acknowledged to have been a shrewd businessman and none of Captain Beefheart’s Bat Chain Puller has yet been released. Nor has even more Captain Beefheart material which some people suspect is contained in the famous Zappa vaults. It is now, of course, to Frank Zappa’s widow that any question of permissions should be addressed and anyone having anything to do with Frank Zappa’s music is aware of this.

It is strange then, that when on Saturday a street in Berlin was renamed after Frank Zappa, the organisers of the accompanying festivities were in receipt of a letter from lawyers representing Mrs Zappa. Somehow it had escaped the organisers attention that there were protocols to be followed in dealing with the widow of a famous composer, as Ed Mann, former Frank Zappa stalwart, explained to Kill Ugly Radio.

I am told that the celebration of the street-naming was, however, a great success.