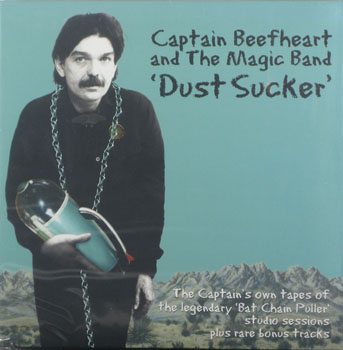 The original version of the Bat Chain Puller album gets a ‘legitimate’ release alongside some additional live tracks and out-takes. Released on 18th March 2002 by Milksafe Productions and marketed by Ozit-Morpheus Records (http://www.geocities.com/uheep2/ozit.htm), the people who gave us the Merseytrout CD.

Includes an 8 page booklet and the first 4000 come with a ‘special limited’ cover apparently.

This is a difficult one! Widely bootlegged this amazing album is long overdue a legit release, but is this it?

The understanding amongst fans was that the rights to this album were/are held by the Zappa Family Trust but there is no mention of them anywhere on this cd. The company releasing Dust Sucker
give a lengthy explanation about how they came to have the tapes. The full story can be found here – http://www.geocities.com/uheep2/cb2.htm. In short they claim that the late Roger Eagle (legendary Liverpool figure and promoter of many Beefheart UK concerts) was given a tape of Bat Chain Puller by Don himself with permission to release it. (In fact, it seems to be saying that these are demos/early versions of the tracks that would be recorded for the album). After several failed attempts in the past 26 years the album is now available. 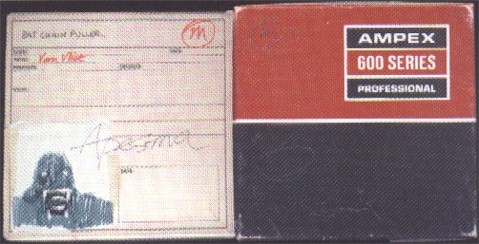 The box of the original tape given to Roger Eagle by Don, allegedly.

It is a good story but does it make it a legit release – I honestly don’t know but am dubious about the whole project. Even more so knowing that Ken Brooks (author of many shoddy books) has had some involvement with it – his grasp on the facts of Don’s career were tentative at best, downright bizarre the rest of the time. Many of the facts in the explanation are incorrect – for a start, BCP was not recorded at The Manor.

All the tracks from Bat Chain Puller are here but I would query the titles of two of them. ’81 Poop Hatch’ was originally just ‘Poop Hatch’ – the 81 being added when it was used on ‘Ice Cream For Crow’ (although it’s the same recording) – and ‘Owed T’Alex’ which was known as ‘Carson City’. Didn’t the listing on this ‘original’ tape have those titles or have they been updated to the newer names so as not to confuse us poor fans. There is a short commentary about each BCP track but this is written by the above-mentioned Mr Brooks.

As far as sound quality goes, BCP is okay but the recent boot version that came out (the one with
mono mix of Safe As Milk on the same disc) is better. Interestingly the track, Bat Chain Puller, is missing a slight bit at the beginning (which also is a fault on the boot just mentioned) – maybe it’s just a coincidence?

As regards the extra tracks. It’s a good idea to include some live versions of the BCP songs but those chosen come from the boot version of the My Fathers Place show, which is easy to spot because they are too slow!! (they match exactly the tracks on New York Hot Dog Night). The version of ‘Well Well Well’ is the same slightly distorted one that has cropped up on some boot releases. And why has the Amougies track from the Grow Fins box been included?

If you’ve been unable to identify these extra tracks then you’ll remain in the dark because there is nothing on the CD cover or in the booklet to tell you what they are.

And they can’t spell Denny Walley’s name or band-name correctly!

So is it the legit release we’ve been waiting so long for? I don’t think so…

Yet despite all the above reservations like Merseytrout before it Dust Sucker is being sold openly by many established shops.

Sadly, this release has probably nixed any plans by the Zappa Family Trust had to release a correctly mixed remastered version of this wonderful album in the near future.

Footnote: the promo version was sent out without ‘Brickbats’ and with ‘Apes Ma’ on twice! This led to at least one music mag reviewer getting things wrong.

Ozit have released a limited two disc set on 180 gram bright green vinyl. Just because it’s on quality vinyl doesn’t mean the sound quality is any better than the cd version they released. It does look kinda
cool though. 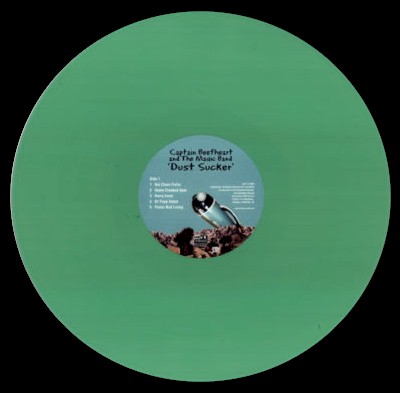 I’ve seen it listed as being a hand numbered limited edition of 500 and 1000. But as I’ve seen #551 offered for sale it looks like the 1000 figure is probably more likely … unless there are a couple of separate runs!

There does seem to be a separate numbered issue on BLACK vinyl limited to 1000 just to add to the confusion.

Peter Ellenbruch contacted the Radar Station to report on the sound quality of this vinyl version. He says that “side A of the LP has a mastering error – and it sounds like shit. All the people I know who
have a copy have reported this problem (no matter if on black or green vinyl). The volume level is very low and most of the bass frequencies are missing.”

So, it seems to be up to Ozit’s usual standard then!

Back to the Original Bat Chain Puller index