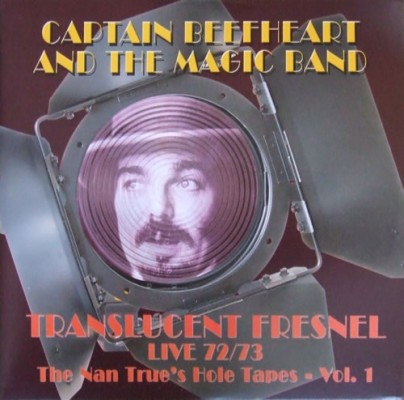 Side Three
Low Yo Yo Stuff
Mirrorman
Peon 2
Peon

The title obviously is a reworking of Clear Spot – Translucent Fresnel (Fresnel is a spotlight). From the late 1960’s through to 1980 John Peel collected tapes of recordings of Captain Beefheart’s live shows particularly ones in the UK. During a tidy up at Nan True’s Hole in 2003 he discovered around six large reels of tape containing many of Beefheart’s live UK performances and he sent these on to Ozit Morpheus Records. Here is Volume 1 of material from the tapes. Like all Beefheart live tracks they are chaotic, erratic and yet charming.

Because of the age of the material and sometimes crude recording techniques there is the odd glitch in the recordings but rather than try and digitally repair the sound you get it exactly as it came off the tapes warts and all but full of Beefheartian energy. Volume 1 is songs mainly from the Clearspot era tour of the UK. Band line up for most of these tracks : Captain Beefheart -Don Van Vliet -vocals and harmonica / Zoot Horn Rollo- Bill Harkleroad – guitar slide guitar / Rockette Morton- Mark Boston- bass guitar,guitar / Alex St Clair- Alex Snouffer- slide guitar / Ed Marimba- Art Tripp- drums, percussion / Orejon -Roy Estrada- bass guitar.

John Peel said in 2003 “This tape of UK live tracks mainly from the Clearspot Tour era shows the Captain and his Magic Band in fine form. I actually remember these tracks like they were yesterday as I was at a lot of the live shows during that period.” John Peel “Captain Beefheart was driven
in pursuit of his music to the borderline between imbalance and genius”.

Just a few months since Don died and Ozit have already announced their intention to continue to plunder his music. What’s more, this time they are not beyond disrespecting John Peel’s memory too.

First off, let’s sort out what music we have on here because there is the usual singular lack of useful information on the cover. I’ve done a bit of investigating and as far as I can make out the tracks come from the following shows:

The advertising puff contains the usual obfuscation and misinformation. Isn’t it strange that soon after buying discs of some of these shows from a well known Beefheart collector they should turn up as a new Ozit release. If they really had Peelie’s tapes then there would be no need for them to buy copies would there?

It’s strange that Peel never mentioned these tapes to anyone else before. He was forthcoming to more than one interviewer about the fact that he had a recording of the 1968 Kidderminster show and shared it with at least one of them. If he was sitting on a pile of Beefheart live recordings I think he’d have said something to someone.

In fact, Ozit have already tried to sell the Leicester ’73 show to us before. In the booklet for their CB & MB in GB release they advertised the Leicester ’72 and ’73 shows as “Rare Live Concert … only available mail order limited run” and they were charging the extortionate price of 38GBP per CD. No mention then that it was from a Peel tape hoard!

The quotes attributed to John Peel are also suspect – the first bit seems to have been made up (it just doesn’t sound right), the second part has been lifted from the BBC documentary that he did the voice over for.

At least they’re being honest and owning up that they couldn’t be bothered to try cleaning the recordings up at all. So how come they seem to have made them sound worse than the copies I have which probably came from the same source?

The quality issue also makes me wonder why the hell they bother releasing anything like this on ‘superb 180 gram vinyl’. Yes, it’s a lovely hefty piece of plastic but audiophile standard these recordings aren’t, so what’s the point apart from it being an attempt to part vinyl junkies from another wodge of cash.

On ebay they claim this has ‘beautiful artwork’. I wouldn’t go that far but a gatefold double album always looks good (ah the nostalgia, cds just aren’t the same!). They’ve gone overboard with the fresnel = spotlight motif though.

The text on the left is the Roger Eagle story about Don’s lighting demand for ‘Bastard Amber’. The text on the right are some quotes from John Peel. The Penguin paperback is an amusing spoof – an Aldous Huxley book called ‘Don Van Vliet Sold Me A Vacuum Cleaner’. The tape spool and box are a pathetic attempt at trying to prove the fictitious origin of the material I suppose … but why would Peel chop up the running sequence of the Leicester show and intersperse it with a couple of tracks from Manchester and even bother calling it ‘Translucent Fresnel’? I think he had better things to do.

On the back cover all the band make another appearance. At least this time Ozit have named everyone correctly and they do all appear on the songs from Leicester. However, for the 1972 tour it was Elliott Ingber (Winged Eel Fingerling) and not Alex St Claire on guitar … but Elliott doesn’t get a mention.

So, again another wasted pointless effort by Ozit. Our recommendation — don’t buy it.

Presumably it’s not their last as this is ‘volume 1’ …

Thanks to RobF for pointing out that ‘Electricity’ from Leicester 1973 was also included on a previous Ozit release – the awful Live ‘n’ Rare in 2004. And there was no mention of a Peel tape collection then although the release was supposed to have been a tribute to him.

Ceejay emailed me to make it clear that a ‘fresnel’ is not a spotlight. It is actually a type of lens that can be used in one.