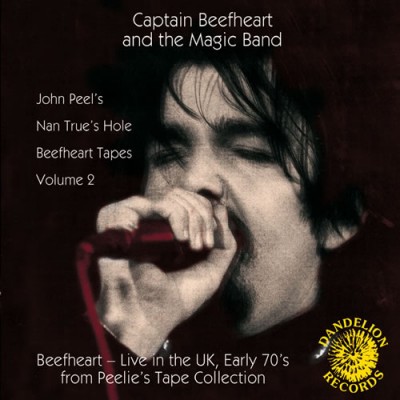 Well it doesn’t come as any great surprise that volume two has appeared. It didn’t take a great leap of imagination for me to predict this would happen in my review of volume one.

This time only tracks from 1972 have been chosen from the ‘John Peel collection’. They’ve been arranged in alphabetical order (not the first time they’ve done this!) – at least the first ten tracks have been but presumably the compiler got fed up with that and just stuffed the final four on the end in no particular order.

Is there anything nice I can say about this? I quite like the front and back cover, the photos are contemporaneous with the music. All the Magic Band are named correctly for that 1972 tour (a big improvement on previous efforts). And, of course, I like the music. I also have to say the sound quality is probably the best so far … they’ve not managed to bugger it up as per usual.

However, not everything is as good as it could be … although I wonder whether they do it deliberately just to give me something to moan about. So here goes:

1. track two, Acapella Beefheart is technically a correct title but it is in fact Old Black Snake

3. at the end of at least two tracks Don is heard introducing a particular song only for a different one to be played

4. there are no venues listed so it’s not obvious from which shows the tracks originate. From what I’ve heard most (if not all) are taken from the Royal Albert Hall show of 23 March 1972, but the running order has been mixed up. The sound quality also points to it being from the complete version that only appeared on the collectors scene two or three years ago (make of that what you will).

Overall a better effort … but they’re still taking the piss. 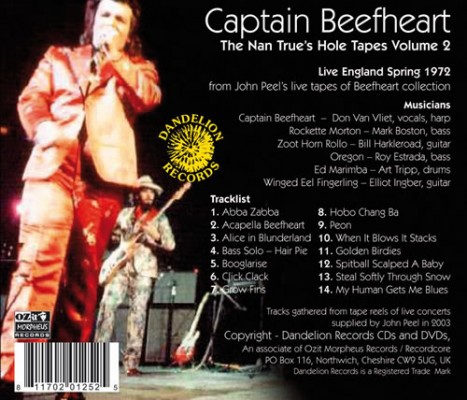 Please note this cd is ‘Copyright – Dandelion Records CDs and DVDs’ so don’t you go bootlegging the content on here.