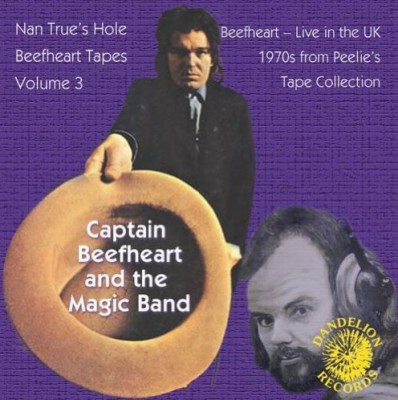 This is the third in the series of Nan True’s Hole Tapes . All these tracks were recorded live in England in the 1970’s and taken from John Peel’s former archive of Beefheart live tapes. This volume presents more of a mystery than the others as Peel had collected all these tracks onto a reel of tape but did not detail which members of the Magic Band play on which tracks and no dates other than 1970s, simply noting that this was Captain Beefheart performing some of the most avant garde versions of his live tracks. Peel also noted “recording quality not always excellent but the quality of the outrageous but excellent live performances wins through”

So here we are at volume three of Ozit’s series of flogging a dead DJ. As ever the pre-release blurb is hilarious and full of inaccuracies. But this time it’s John Peel’s fault that Ozit can’t be bothered to do a bit of work and find out when these tracks were played and who was in the band. Could I make a suggestion … why not ask somebody who knows!!!!!!!! But surely if they are the Beefheart fans they purport to be then they’d know the correct names of all these tracks and where they were recorded.

And , wow … “rare montages and images” … you’re spoiling us. Nothing we haven’t seen before although they do manage to include a couple which are from the right year. Three of the ten pages of the booklet are adverts for other Beefheart product from Ozit as usual.

To set the record straight about what we have here:

Tracks 1, 4, 6, 8, 11, – 15 are from the Knebworth Festival appearance on 5 July 1975
Track 2 ‘Poofters From Wyoming’ – is, of course, Poofters Froth Wyoming (Plans Ahead)
Track 10 ‘Poem’ is ‘One nest rolls after another’
Track 11 ‘Sax and drums duet’ – is actually the full Knebworth band improvising and soloing with Don blowing sax over top (it’s usually listed simply as ‘improvisation’)
Track 14 ‘Dali’s Claw’ – is a second version of ‘Alice in Blunderland’ (this one is from Knebworth)

Why have they taken a pretty good recording of the legendary Knebworth show, rearranged the running order and then interspersed it with songs from another sonically inferior 1975 show?

At the time of writing I haven’t been able to identify the other show … the heavy veil of hiss covering the music makes this an uncomfortable listening experience. I have not heard such a poor quality recording from a 1975 show before. Where the hell did Ozit get this piece of crap from? They’ve managed to get hold of the worst sounding tape of one of that tour’s shows … or they’ve added a load of hiss to a decent sounding one.

Whatever the reason, and who can fathom what Ozit are thinking, it doesn’t alter the fact that this release is pitiful.

What makes things worse is that they are exploiting the memories of two well respected men, Don van Vliet and John Peel, and a legendary record label, Dandelion, by peddling this garbage.

Don’t buy it … ask your friendly Beefheart collector and get yourself a good quality cd of the full Knebworth show instead.