Robert Williams aka Wait For Me 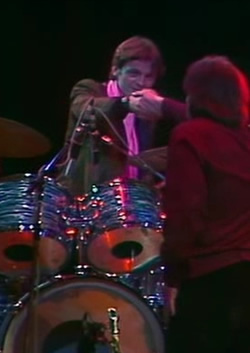 Robert was still in high school when he first met Don and became his roadie for a week in Boston during the Tragic Band days. At one particular club they played Dr John was auditioning drummers and Robert put on a display of what he could do. Although he didn’t get the gig with Dr John he seems to have impressed Don.

When Robert moved out to California he managed to get Don’s phone number and spoke to him for hours on end. One day Ed Mann, Zappa’s percussionist called him to let him know Don was auditioning drummers. And as Robert told us:

When I called him regarding that, instead of saying hello he said, Hi Robert and that was before caller ID. He had me go to Tepper and Feldman’s house to get the keys to the rehearsal studio and to borrow their Beefheart LPs. I spent every waking hour preparing for the audition over the following week. I was halfway through the first song of the audition when Don started waving his arms around to stop. He said, I’ve heard enough. You’ve got the job let’s go get some iced tea.

So Robert was hired and began performing live with the band from 31 October 1977 (Buffalo State University was his first show), and appeared on two of Don’s final albums.

The way it ended was, I had a record deal with A&M Records in 1981 and when Gary Lucas (manager at the time) told me rehearsals for the new record were coming up I told him I was already committed contractually to start my follow up record to my EP Buy My Record. The studio, my band, and engineer were all set to start which conflicted with Captain Beefheart’s schedule.

Since that time he’s been fairly active as a sideman as well as releasing a few solo projects. He had a famous falling out with John Lydon and agreed to take part in the Judge Judy TV court show to air those grievances. Robert felt he was stitched up by this programme and lost his case.

Robert played drums on the two 2003 UK shows by the Reunion Magic Band, allowing John French to take on the vocals duty.

In 2007 he toured as part of Hugh Cornwell’s band and is currently (2011) working on another solo project.

There is an old interview with Robert on the Homepagereplica site.