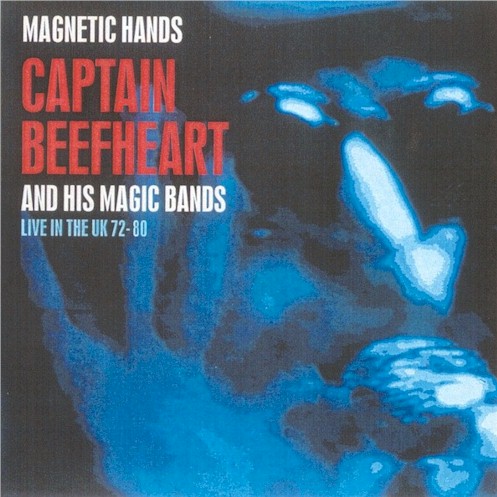 A collection of awesome live performances by Don and the Magic Band taken from ‘historic’ recordings of UK tour shows. Sleeve notes by Bernie Connor. Released on 10th June 2002 by the independent Viper Label based in Liverpool.

The Magic Band have had a fearsome reputation as a live band and this CD goes some way to justifying the legends. Drawn from 7 venues, across 8 eight years and 6 different incarnations of the Magic Band there are some staggering performances here.

Being familiar with this material from circulating tapes I was still stunned by the quality of the music that tore out of my speakers. The three songs from the ’72 Bickershaw Festival show Don in fine voice, giving ‘Old Black Snake’ a real seeing-to while the Band show just what a tight machine they’d become with a ‘Grow Fins’ and ‘Click Clack’ to die for. The version of ‘Peon’ from Manchester ’72 has always been a personal favourite plus there’s a fine ‘Golden Birdies’ followed by Don’s whistled ‘More’ encore.

By 1973 (Alex St Claire had replaced Elliot Ingber) the Band were slightly looser but this ‘Electricity’ could be plugged direct into the National Grid – jaw droppingly good. And then it’s followed by a blues workout – a regular on the ’73 tour – based around ‘Sugar Mama’ and ‘King Bee’. Probably not the most musically challenging piece the Band ever played but what the hell. A stinger as long as my right arm, indeed!

Luckily the ’74 tour has been skipped and we go direct to the legendary Knebworth Festival in 1975. ‘Gimme Dat Harp Boy’ is a real stonker – heavy man – in part due to two drummers and Bruce Fowler’s trombone doubling as bass!! Meanwhile Don gets himself in a tangle with the lyrics of ‘Orange Claw Hammer’ – is he going to get himself back to the right line or not?!

In the later ’75 tour John French got to play ‘Dali’s Car’ live. Unfortunately we don’t get his famous tap dance included here but we do get to hear more Bruce Fowler airbass on a ‘Beatle Bones…’ that goes to the edge and looks over.

It was another five years before the Magic Band played in the UK again and this time it was with a complete change of personnel. There was also a change in the dynamics of the music but the same passion was still there. So here we have Gary Lucas battling his guitar at The Venue to give us ‘Flavor Bud Living’ and the rest of the Band in Liverpool storming through some old favourites – ‘Nowadays A Woman…’, ‘Abba Zaba’, ‘Safe As Milk’, ‘Dropout Boogie’ and ‘Kandy Korn’ plus the most recent song on this release ‘Hothead’ from ‘Doc At the Radar Station’. These may not be Don’s greatest vocal performances but that’s part of the live experience, I guess. (Soundwise though the versions here are better than those on the ‘Merseytrout’ release).

You’ve probably gathered I’m pretty keen on this CD. Too right I am – it’s been a long wait to see this material readily available. Okay, if I have to balance this review then I’d have to say that it’s a pity that the Bickershaw tracks have some sound problems and wouldn’t it have been great to have had one complete show. But realistically that wasn’t possible … and I have to say Viper have done a great job in ‘cleaning up’ the sound of all the tracks included here. So … thanks, Viper.

The sleevenotes by Bernie Connor are well written – it’s always fascinating to hear how others discovered Don’s music – and are factually correct which, after the shameful efforts we’ve seen recently from Milksafe/Ozit/Morpheus, is a major plus.

As a footnote: Viper told me that they did all they could to make contact with Don before releasing anything … but to no avail. However, I’ve been assured all composers royalties are being paid.