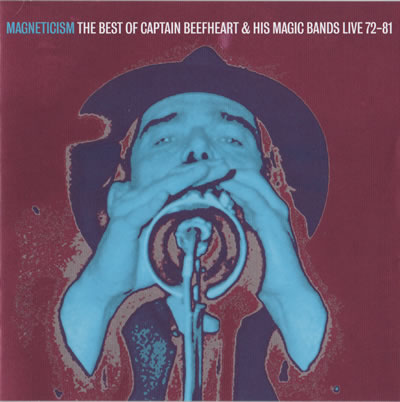 ‘Magneticism’ is a limited edition vinyl only release of strictly 1000 copies worldwide, combining the highlights of two previously released CD albums : ‘Magnetic Hands’- Live in the UK 1972-80 released July 2002 and ‘Railroadism’ – Live in the USA 1972-81 released May 2003 with other previously unreleased ‘live’ rarities.

Covering every period of the Captains work and all points inbetween, these live performances were chaotic, cacophonic, and unforgettable events. This is truly a historic document showing one of the great innovative and inspiring bands of the modern age on staggering form, in this collection of awesome power. This will not only be of importance to Beefheart freaks but to the world as a whole. Also features previously unpublished photos and indepth liner notes.

As the press release says this is a vinyl release for a selection of live tracks taken from the Magnetic Hands and Railroadism CDs.

If you want to know more about the tracks etc. then follow the above links to the reviews of the CD releases.

Viper used to release a vinyl edition alongside most of their titles but decided not to do this for the two Beefheart CDs. However, so many people asked them about a vinyl copy that they eventually gave in and compiled this combination of the two.

Not only have they compiled the music but they’ve also compiled the sleevenotes from both of the CD releases. These have been joined together to provide some strange surreal cut-up prose piece … hilarious.

Yes, Viper have decided to release a CD version of their vinyl compilation of the two CDs of Beefheart live material!

It’s not just the vinyl with some tracks added because there are three tracks on the vinyl that don’t appear on this CD version.

There’s a great little booklet with some fine photos of Don and the band plus an enthusiastic essay by Bernie Connor.

Magneticism is a great romp through some prime live Beefheart despite a few sound quality issues but the power of the music overrides those faults.