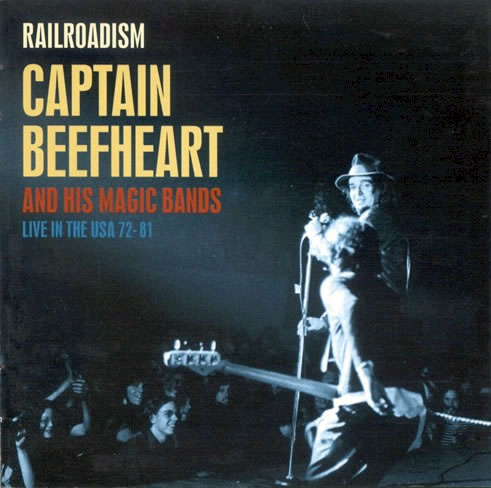 Another collection of incredible live performances by Don and the Magic Band taken from ‘historic’ recordings of shows in the USA. Sleeve notes by Bernie Connor. Released on 12th May 2003 by the independent Viper Label based in Liverpool. See the Viper website to read what they have to say about the album.

From the people that brought you the Magnetic Hands album here is a similar collection of stunning live performances. This time they are culled from rare recordings of American shows made betwwen 1966 and 1981.

For those of you who were put off by the poor sound quality of some of the Magnetic Hands collection you will be pleased to hear that Viper had a better selection of recordings to choose from this time around. All 18 tracks are good to excellent sonically.

Viper have compiled this disc to complement the previous one so there are only a couple of duplicated songs – ‘Old Black Snake'(this time from Boston 1972 and ‘Grow Fins’ (this time from the 1977 band rather than the 1972 one). They have also managed to include a very rare item, something that amounts to a new Beefheart song many people will not have heard before – ‘Railroadism’ is a close cousin to the legendary unreleased ‘Hoboism’. It emerges from a brilliant performance of ‘China Pig’ which Denny Walley always played so well – his solo guitar driving Don along on what may have been an improvised piece. I have not heard of any other instances of this song being performed live – if any one can tell me otherwise I’d be pleased to hear from them. Pretty much worth the price of admission alone!

Other rarities include Don singing ‘The Blimp’ live with the short-lived 1975 (Knebworth) Magic Band that exits with some amazing sax blowing; and the inclusion of the 1966 blues workout from the Avalon show which for some reason was omitted from the ‘Grow Fins ‘ box set; adding the ‘Avalon Blues’ track as a coda to the whole CD is an inspired touch.

One real oddity of a track is the 1975 version of ‘I’m Gonna Booglarize You Baby’ – there’s a strange beauty to it as it’s quite ramshackle and seems to be on the verge of falling apart, but Don’s singing keeps it together as the band crash and swirl behind him (put the recorded version out of your mind when listening!!)

There are many other highlights here – Don really stretching his vocals on ‘The Dust Blows Forward’ (and the audience keeping quiet while he does it!); his whistling on ‘Harry Irene’; a stonking ‘Smithsonian Institute Blues’ and a grandstand finish with ‘Big Eyed Beans’. Two days after this gig Don and the Magic Band would play their last ever live show…

The release also comes with extensive liner notes from Bernie O’Connor plus a whole bunch of photographs not published before (although you may have seen some of them on the web).

There have a been a couple of very mean spirited reviews in ‘Mojo’ and ‘Record Collector’ which have me totally baffled.

None online yet that I know of.