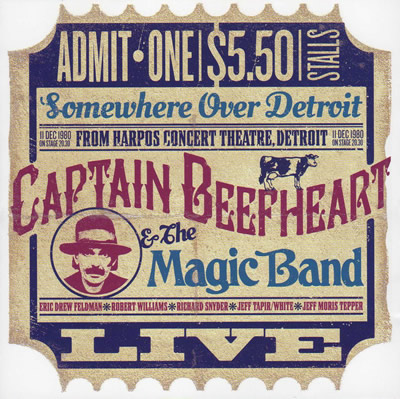 Publicity blurb from Gonzo Multimedia: “This extraordinary record catches the Captain at his best; live on stage in 1980 during the tour for ‘Doc at the Radar Station’”

No, this isn’t a previously unknown soundboard recording of the Harpo’s gig, just in case you were wondering. This the same audience recording that has been circulating amongst Beefheart collectors since the tape-trading days.

As an audience recording goes it’s not too bad apart from too much of the audience being recorded. There is a lot of annoying “whooping” and crowd noise which detracts from what is an exciting show. If you are able to ‘listen through’ the whooping idiots then this has a lot going for it. The band are on stonking form (as they were pretty much throughout this tour) as is Don who remembers all the lyrics for a change.

The band are playing with such energy that strings are broken during ‘Safe As Milk’.

‘Suction Prints’ is played with Don stronking his sax as one of the encores, the final one being a thunderous version of ‘Big Eyed Beans’.

The packaging is basic. The mocked up poster cover is good although there’s something strange going on with the names of the Magic Band. Jeff Moris Tepper is on there twice as he’s also listed as Jeff Tapir/White … this latter name obviously causing someone confusion as it was once used as Jeff’s band name which in full was  Jeff Tapir/White Jew(el) Kitabu (Eric Drew Feldman was Black Jew(el) Kitabu). Inside the booklet is a short overview of Don’s career written by Jon Downes which manages to get all the facts right

If you are able to listen happily to audience recordings then this is worth getting but avoid it if you hate having to listen to the audience in the mix!