By: Steve
In: Blog, New releases, Unofficial releases
With: 4 Comments

The third in the series of live shows released by Gonzo Multimedia. 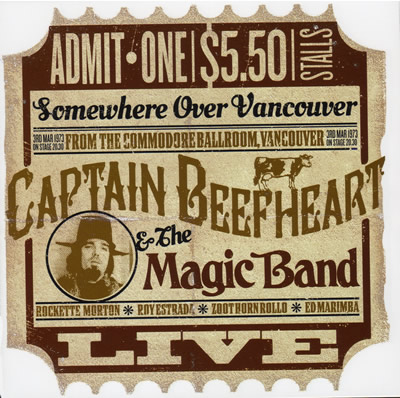 This is the third in Gonzo’s releases in their series “Somewhere Over…” or “Live From…”series . They can’t seem to make their mind up which one to go with so have used both – one on the cover, the other everywhere else.

This is the concert from 3 March 1973 at the Commodore Ballroom in Vancouver.

As before this release follows the style set by the previous ones. The artwork and sleevenotes are almost exactly the same apart from changes for the venue and band details. However they forgot to change the date on the spine so it’s listed as “Live From Vancouver 1977”. The band names are correct this time, although they have missed Alex St Claire, presumably because in the band introductions Don called him “the mystery guest” instead of naming him.

Anyone who saw the band on the 1973 tour will agree that the band were on top form and the shows were a tour de force. Despite the limitations of this recording you do get some feeling of the energy and power of the band. When I first received a copy of this many years ago, back in the days of tape trading, I considered this a good one. It was better than many other unofficial recordings around at the time but for all that it is a typical audience recording of the 1970s. I’m not sure that it’s good enough to be packaged and sold as a commercial entity like this, especially when no monies will get back to the guys who performed the music.

This show like most live Beefheart is available for free elsewhere. Check it out there.