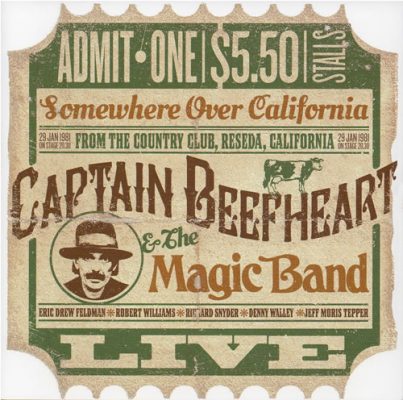 One of the last concerts of what would turn out to be Beefheart’s last tour, took place in one of the many towns surrounding Los Angeles, Reseda.

Gonzo are continuing their ‘Somewhere Over..’ series. This time it’s ‘Somewhere Over California. Live from Reseda 1981’. The design carries on the distressed ticket-stub look with generic sleevenotes. The list of band members is correct plus there’s an image of the concert poster from 10 days previous to this one.

A double vinyl bootleg of this concert, called Best Batch Yet was released in the 1980s and was probably one of the best sounding recordings of a Beefheart concert at the time. A double CD bootleg version appeared in 1999 as Country Club, Reseda 1981. The sleevenotes from that CD set were included in this site’s review and these have been quoted by Gonzo as part of their publicity blurb on their website.

If you haven’t heard this 1981 Reseda show then you need to, it’s one of the best. The sound is very good, there’s a fine setlist plus Don and the band are on great form. There’s even a guest appearance by Denny Walley on China Pig.

This Gonzo release doesn’t bring anything new to this concert apart from making a bootleg widely available through legitimate stores. It’s up to you whether you buy a copy of this release or seek it out elsewhere.