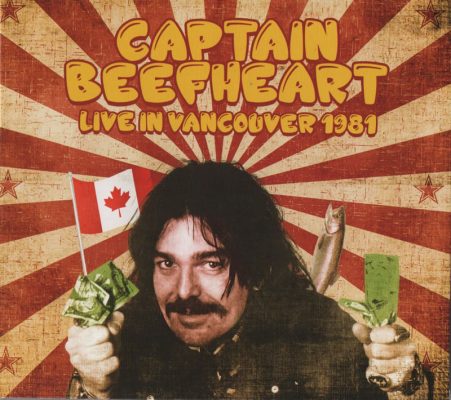 Captain Beefheart and his Magic Band toured Europe and North America to promote their critically acclaimed album, Doc At The Radar Station. This would be their final tour together. A year later, Don Van Vliet aka Captain Beefheart, turned his back on the music business to focus on painting. Broadcast live by CBC at the Commodore Ballroom, Vancouver, on 17th January 1981, this gig features a stunning set that showcased Captain Beefheart’s blues-based aural art served with a twist of brilliant madness. As the Captain said, “If you got ears, you gotta listen.”

From the same people who brought us the full Avalon 1966 concert this is another ‘grey area’ release that gets around the copyright issues because it is a recording originating with a radio company. Apparently it’s released under license from Obiterdictum – “home of the largest catalogue of radio broadcasts on CD and Vinyl” – based in Cyprus.

At least this is a show that hasn’t been bootlegged before although it has circulated amongst collectors for many a year. The sound is generally pretty good although the drums are a bit distant. It says on the cover that it has been “digitally remastered”. The band are in fine form which they were for most of this tour and Don keeps up with them for a change.

Not sure what the cover is all about. That could have been better. There is a small insert with some photographs of Don and the band along with a unsigned short piece emphasising Don’s strangeness and unwillingness to fit in. It also claims he had a seven and a half octave voice and that the song Bat Chain Puller wasn’t released until 2012. No I don’t think so!

Another glaring error appears on the setlist – Nowadays A Womans Gonna Hit A Man instead of ‘…Gotta Hit A Man‘.

As with all unofficial releases you end up with mistakes of one sort or another. This is not the worst. At least the music is excellent.