By: Steve
In: Blog, New releases, Unofficial releases
With: 1 Comment

A 2 CD set of the excellent show at the Le Nouvel Hippodrome, Paris in 1977. 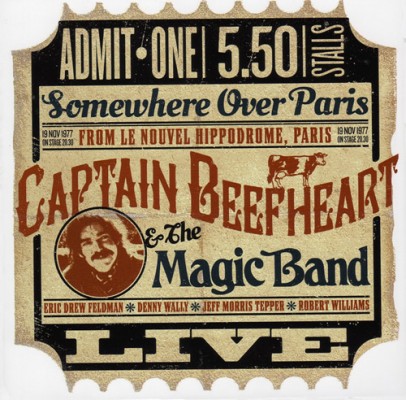 Disk 1
1 Hair Pie: Bake III
2 Suction Prints
3 Low Yo Yo Stuff
4 Bat Chain Puller
5 I Wanna Fina A Woman That ‘ll Hold My Big Toe Till I Have To Go
6 Abba Zaba
7 Dali’s Car
8 One Nest Rolls After Another
9 The Dust Blows Forward and the Dust Blows Back
10 Nowadays a Woman’s Got To Hit A Man
11 Click Clack
12 Grow Fins
13 Golden Birdies

Gonzo seem to setting off on some sort of series of live Beefheart releases. This is the second and follows the style set by the first one (Live from Harpos 1980). The artwork is almost exactly the same apart from changes for the venue and band details. Even the sleevenotes are the same with only a variation in the last sentence. At least they have got the band names mostly correct this time, although Denny’s surname is spelt incorrectly on the front cover.

This is an interesting show, part of a festival at Sorbonne University organised by a French Trotskyist party (Gong, Prime Time and Buffy Saint Marie also performed). It was the only performance by the band in Europe, the first visit since the end of  1975 and the last until late 1980 although there would be several US tours. The setlist is excellent with tracks from all the major albums (except Strictly Personal and the two Mercury ones) as well as showcasing songs from the new album Bat Chain Puller recorded 18 months before but which wasn’t destined to be released until over 30 years later. ‘Bat Chain Puller’, ‘Floppy Boot Stomp’, ‘A Carrot Is As Close…’ and ‘Owed T’Alex’ are all played. There is also a rare outing for ‘The Blimp’ performed by Don’s then manager, Harry Duncan, who also plays harmonica on several songs.

Overall the sound is very good bootleg quality. Well balanced so you hear everything. There are a few abrupt edits and a couple of dropouts in volume. The audience is quite noisy but doesn’t spoil the music although it is annoying during ‘The Dust Blows Forward…’.

Don seems to be enjoying himself (only complaining about the lights a couple of times) and the band’s playing is tight. I’ve always liked this particular show.

A few days later in an interview with ‘Zigzag’ magazine Don said “I’m real happy now, I mean REAL happy. I played Paris and the people were dancing and everything to our music. It’s amazing, people dancing to avant garde music, or whatever they call it now.”

If you already have a copy then you probably don’t need this release as it’s the same source as the versions that have been circulating for many years. If you don’t have it then it’s worth checking out one way or another.