It Comes to You in a Plain Brown Wrapper discography 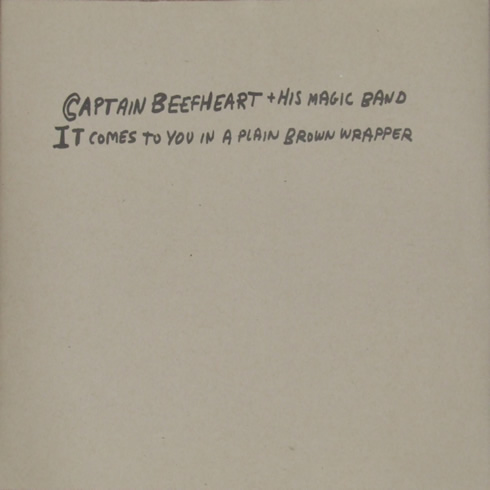 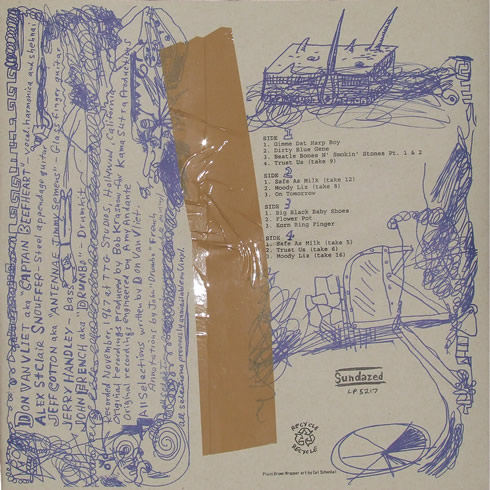 Further outtakes appeared on the I May Be Hungry But I Sure Ain’t Weird CD, the Grow Fins boxset and the remastered Safe as Milk and Mirror Man CDs and vinyl and The Buddah Years compilation.

The plain paper wrap-around slipcase held together by some packing tape complete with tracklist, musician info and doodles is by Cal Schenkel. Although it’s more plain grey than plain brown!

The album cover itself opens up to reveal a fine photo of Don by Jon Levicke … but it isn’t contemporaneous with the music. It was taken onstage in a small club (Thee Experience) in 1969 and Don is wearing the Trout Mask hat and coat and playing a sax. There’s a similar photo on the inside of the cover. Sundazed are committing the same travesty that annoyed the hell out of us when Buddah released Mirror Man with the wrong Magic Band on the cover.

Inside the fold out cover is another great piece by John French. Although it would have been even more interesting if he’d been able to go into greater detail about the recording of the songs. But I guess he’s sensibly hanging onto the good stuff for his book.

What we don’t have here is the ‘lost’ ‘Brown Wrapper’ album. In case you’re wondering that will never happen because the original 2″ tapes were cut up during the production phase of Strictly Personal by Bob Krasnow.

The tracks on this double album are from the original sessions in November 1967, and many are works in progress with no vocals. All have been released before apart from Moody Liz (take 16) – this is an excellent version, different from and without the vocal that’s on take 8 and it sounds mighty fine.

Overall it’s a flawed release … a bit of a letdown due to Sundazed overcooking the hype about what they were actually releasing. It’s a shame because it would have been worthwhile doing something really special to celebrate 40 years since the release of Strictly Personal.

Even so, I have to say that this makes a nice addition to any Beefheart collection … and a real bonus for vinyl freaks.

I just received this LP and did a nice digital transfer, and here’s the dilly-yo:

The sound quality isn’t as good as the old Sequel CD, and the vinyl is a bit noisy. All the hype about better tapes being used for the first time is an absolute farce. It’s really the first time they were used for “an LP”, which is irrelevant.

Not only that, there is a glitch/skip during the intro of “Beatle Bones” that is not vinyl-based, “Gimme Dat Harp Boy” fades out instead of ending cold like the CD versions, and “Korn Ring Finger” has been heavily noise reduced to make it appear like a better source. You can hear phasing and sucking artifacts. The “Grow Fins” box remains the best source for that song, even with all the hiss.

The artwork, liners, and alternate Moody Liz are nice, but sadly the only reason to own this LP. Too bad they didn’t pay as good attention to the sound quality as they did with the artwork. I’m starting to lose faith in Sundazed. We need more companies out there doing right by Beefheart. How about a decent CD version of “Strictly Personal”, with or without the effects?