Captain Beefheart And His Magic Band in Great Britain 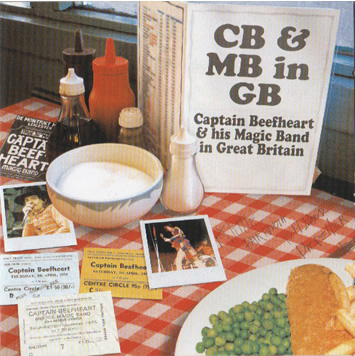 A promoter who put on tour dates for Captain Beeheart in the GB talks
about the concerts;

Frank Zappa and Ry Cooder throw in the odd comment

A slice of hot Beefheart pie recorded in the 60s, 70s and 80s, great for any Beefheart fan’s collection! Captain Beefheart and his Magic Band made regular visits to Great Britain to perform. During this time, Captain Beefheart built up a loyal fan base through his exceptional album releases and his even more exceptional and avant-garde concert appearances in GB.

This CD captures a selection of songs during those concert appearances by the Captain and his Magic Band between the late 60s and 1980. The recording quality varies as we have tried to include ‘across the board’ ranges of material from the Captain’s live GB shows, but the songs are just wonderful in a Beefheartian way!

On first impressions I thought Ozit had made a bit more effort with this release. I liked the idea of the cover … any band that toured the UK would be familiar with similar tables at motorway service stations and roadside cafes. The assorted memorabilia spread out amongst the condiments and cutlery and Don’s ‘paranoia is a good mood propeller’ scribbled onto the tablecloth are a nice touch. Even the various photos and concerts adverts included in the fold out booklet are better quality then usual (Despite the inevitable couple of pages of ads for more Ozit product and the sleevenotes by Mr Ozit himself).

I wasn’t so sure about the date range though – 1970 to 1980! Beefheart didn’t tour the UK in 1970 or 1971 so there can’t be tracks from those years. A minor quibble maybe. This concept, however, has already been done by Viper with their Magnetic Hands live in the UK collection (which they correctly dated as 1972 to 1980), so no marks to Ozit for originality there. The Ozit publicity claims it includes stuff from the 60s … that’s just bollocks.

The list of tracks looked interesting enough with only a small overlap with the songs on Magnetic Hands. Closer attention to the track list, however, sets the alarm bells ringing. Ozit’s lack of attention to detail shows them up yet again – Blows It Stacks, Dali’s Claw, Woe is Up Me Bop, Sam with the Shining Scalp Flat Top – oh dear, oh dear, oh dear!! There’s no excuse for basic errors like this. But, maybe, just maybe it’s Ozit’s little joke … just to annoy all Beefheart fans … or it’s their ‘homage’ to crappy tracklistings of bootlegs’ past. Yeah, right …

So, from my initial, obviously naive, optimism about this album I now had a certain creeping suspicion that Ozit hadn’t got their act together … again. On listening to the album it just confirmed that my suspicions were right. The track list on the CD cover only bears scant resemblance to what’s on the CD itself … see the track lists above to see what I mean! And why, for heaven’s sake, does track 2 have three songs on it (one of which is a the same as track 1 although it is a different version) and track 18 is only 41 seconds of the intro to an unlisted Bat Chain Puller?

Sound quality is inevitably variable as these are all audience recordings. I can live with that. It even sounds like they’ve tried a bit harder this time to clean up the tracks.

As they haven’t been able to list the titles on the CD correctly you’ll not be surprised to learn that there is no other information about the music. When they were, which venue or the Magic Band involved are all left to us to make calculated guesses. At the time of writing I haven’t been able to identify date and place for everything although there’s definitely several tracks from Knebworth 1975, and and at least one from the Manchester 1980 show. [If anyone can identify any others please let me know].

Which now brings us to the second disc … 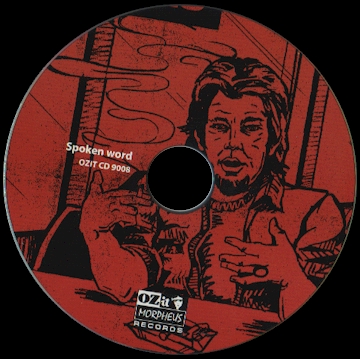 Yes, I like the CD label artwork … but what about the 13 minutes of the ‘rare spoken word soundbites’. Hmmm, what we have here is another Ozit hatchet job. There are four tracks:

This release does include something many other Ozit releases don’t bother with and that’s copyright information. According to the back cover all these recordings are apparently copyright to Ozit Morpheus Records … I’m sure Don would be interested to hear this.

I’ll leave it up to you to decide whether you want to buy this or not … but there’s little on here you can’t get elsewhere if you know where to look or who to ask.

If anyone is able to complete or update any of the information above,
then please do get in touch.