Poet Rock Musicians of the Desert 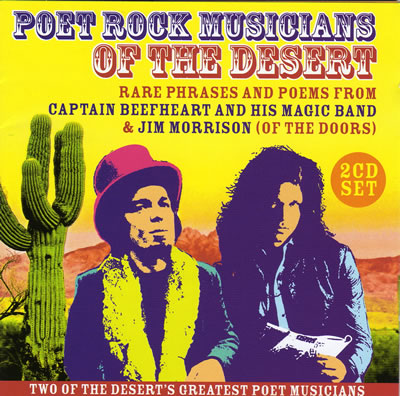 Both men fronted rock bands from the 1960s and into the 1970s, both men had a fascination with the desert and creatures/animals. This album set pulls together some of their poetic words spoken into the mic.

Yes, I was seriously tempted to leave the review as the above comment.

Why should I waste my time on Ozit’s piss poor efforts which are an affront to Don, the Magic Band and all Beefheart fans? Well, I realise I do it as a community service … an attempt to stop people encouraging Ozit by buying this crap.

What a pathetic bunch of reasons they give to justify putting Don on a CD alongside the drunken lizard king. Good grief, it’s another cheap money-making scam by a joke label low on ideas.

As usual there’s no information about the origins of the material on this release. I can’t speak for the Morrison stuff but all of the Beefheart ‘poetry’ has been ripped off from official releases with no copyright acknowledgements at all … which probably comes as no surprise to anyone who’ve come across other Ozit trash.

Here’s a full run down of the Beefheart content, what it is and where it comes from:

Track 1: collection of comments from Jim Morrison about poetry – obviously
from several sources

Track 3: Fallin Ditch – from poetry CD included in the Stand Up To Be Discontinued (SUTBD) catalogue

Track 1: Don says ‘He’s done more for music than anybody at this time’ – (unknown date)

This last quote gives the impression that Don is talking about Jim Morrison whose poetry follows. That, of course, is patently untrue. At the moment I can’t recall where this quote has been taken from –
it’s an interview of some kind. If I can identify this or the other live performances I’ll add them to this page.

Why have two versions of ‘One Man Sentence’ been included? Was one of these supposed to have been ‘Untitled’ which was another poem recited by Gary Lucas? Have Ozit with their usual incompetence and lack of quality control fucked up again? (No need to email with an answer because I don’t care!)