A compilation of live tracks from the 1970s. 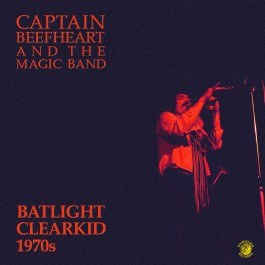 Batlight Clearkid 1970’s is an LP compilation of great Captain Beefheart live material recorded in the UK and in Europe. The tracks are taken from John Peels personal collection of live reel to reel tapes and this album was put together by John Peel in 2002 and passed across for release on the Dandelion label. The gatefold sleeve contains many previously unseen Captain Beefheart images. The initial pressing will be 1000 units in 180 gram yellow vinyl

Ozit continue to do what they do.

What an awful title. At least they’re now crediting it to ‘Captain Beefheart And The Magic Band’ instead of Don Van Vliet And The Magic Band’. But all round this is a shameful release and a waste of vinyl (180g yellow or otherwise) that is disrespectful to the memories of both Don van Vliet and John Peel.

Don’t waste your money on it!