By: Steve
In: Unofficial releases
Tagged: 1975, Knebworth
With: 3 Comments 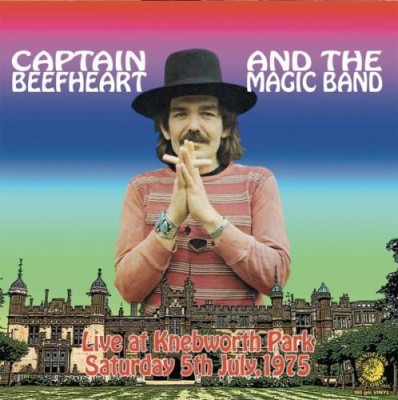 Special edition 2000 units only in 180 gram orange vinyl gatefold sleeve. Captain Beefheart and The Magic Band returned to England with a new line up in 1975 to appear on the bill with Pink Floyd at Knebworth Festival.

I see Ozit have gone back to listing ‘Captain Beefheart’ instead of ‘Don Van Vliet’. Does that mean they feel safe about the use of the name now Gail Zappa has passed away?

An effort has been made to use a relevant photograph of Don, taken at that Knebworth concert, looming over a picture of the crumbling pile that is Knebworth House. The back also boasts a picture of the actual band that performed as does the inside gatefold.

The only text apart from the setlist and the band names (which are correct) is a short review of the show by Benjamin Horrendous. This is the source of the band names too. The review has been lifted directly from this website – see www.beefheart.com/knebworth-5th-july-1975-review-by-benjamin-horrendous/ – without the permission or acknowledgement of Ben the author or of the Radar Station.

This was a short-lived incarnation of the Magic Band that played about four or five live shows and never recorded. There might have been film of the band playing live in a US TV studio if Don hadn’t decided he didn’t want to do it and made it impossible. But for all that, this band performing at Knebworth was an important moment in time for Beefheart fans. We all wondered if Don was going to redeem himself after the disastrous recordings and tours of 1974?

This release is based on the fan recording that has circulated among collectors for many years. But note that this is not the complete show. The final three songs are missing. These were Sam With The Showing Scalp Flat Top, Improvisation and Big Eyed Beans From Venus.

The quality of the original recording was only fair with some parts being good. As usual the quality of this Ozit release is very poor – releasing it on vinyl doesn’t make it any better – so it’s best avoided. And it’s a bit of a cheek by Ozit to claim ‘World Copyright’ on these recordings! 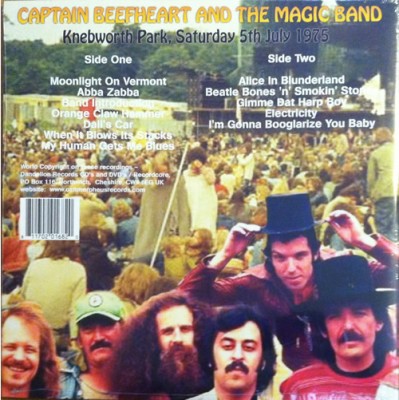