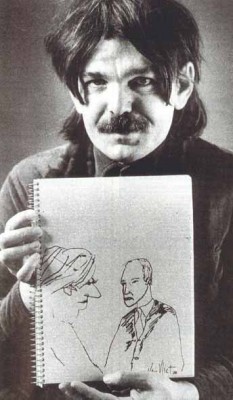 Pop-flavoured R&B from the Californian outback, these rare mid-60s sides are nevertheless notable for the Captain’s Wolf-like growl and harmonica squeals. Some wonky slide guitar, and one or two odd time changes hint at the Magic Band’s wayward future.

Not as psychedelic as its ’67 vintage might suggest, “Safe As Milk” instead provides a thrilling new take on garage-blues. The arrangements are stranger, the voice booms with intimidating authority, and the guitars start to revel in the new rock-era freedoms.

Not recorded live in 1965, as the sleeve legend has it, but a live–in-the-studio set dating from late 1967, this four-song portmanteau of lengthy jams showcases the Magic Band’s blues-improv capabilities. It was released belatedly in 1971.

Having stretched blues-rock, the Magic Band now started the dismantling process, twisting it into awkward shapes. According to Beefheart, they got unwelcome assistance from producer Bob Krasnow, who ran the finished tapes through all manner of psychedelic studio trickery. Others suggest this was simply Beefheart’s way of apportioning blame elsewhere in the wake of poor sales.

I May Be Hungry But I Sure Ain’t Weird: The Alternate Captain Beefheart

An unexpected bonus came in 1992 when tapes from the “Strictly Personal” sessions, sans trickery, were dusted off by Sequel. Gutsier and more angular than the official album suggested, the alternate takes on “Hungry” were mind-boggling – and a true indication of just how far the Magic Band had come in the 12 months since “Safe As Milk”.

If the mike they’re putting on Mars beams back sounds half as strange as this, we’ll be surprised (and delighted!). Like nothing else heard before or since, and crammed with enough musical ideas to keep everyone else busy well into the next century, “Trout Mask” just might be the only truly original rock album -though you might dispute the ‘rock’ tag. While other records pretend to defy the categories, “Trout Mask” is the real thing: each instrument alternates between daredevil runs and repetitive hooks, seemingly at random, though eventually interlocking into the most intricate and nourishing musical experience you’re ever likely to hear. Plenty of laughs, too.

You could call this “Trout Mask Replica” part two but without the spoken-word gags or the luxury of having two discs to fill. Art Tripp’s marimbas add extra texture, while the crystal-clear arrangements lend a greater refinement to an album that’s virtually the equal of its forerunner.

Having extended the bounda-ries of popular music on his previous two albums, Beefheart guardedly re-entered the rock mainstream with his next two records, from 1972 and 1973 respectively.

“The Spotlight Kid” was dark, gloomy and restrained – possi-bly reflecting the Captain’s disappointment that his previous work was misunderstood, though Zoot Horn Rollo provides another explanation (see interview).

“Clear Spot” was a different matter altogether. It was as if a gun had been held up to the Captain’s head, forcing him to come up with an album that sounded like a conventional rock record, but without losing the distinctive Magic Band dynamics. They succeeded admirably, came up with what’s arguably Beetheart’s best-known moment in “Big Eyed Beans From Venus”, and still had room to spare for some idiosyncratic ballads.

Having won over the cynics, Beefheart then embarked on a course of action that not only lost him his new audience, but much of his core audience, too. Few albums come more inappropri-ately titled than “Unconditionally Guaranteed”, which attempted to make the Captain sound as lame as any mid-70s rock act that wasn’t still playing lengthy prog extravaganzas.

Only in retrospect is it possi-ble to hear Beefheart handle a song like “Observatory Crest” and find something, well, rather pleasant about it. But whatever way you look at it, this is not really your Captain speaking.

Those lucky enough to locate a tape of the original “Bat Chain Puller” album, recorded with his best band in years and with his nemesis / associate Frank Zappa at the controls once more (Frank had been behind the desk for “Trout Mask”), knew the Captain was up to his old tricks by the time punk altered the musical landscape. While young Beefheart fans like Johnny Rotten were forming bands, the Captain re-recorded the “Bat Chain Puller” material for Virgin, bringing a more palatable sheen to that loveable Beefheartian angularity.

Almost certainly the best of the ‘comeback’ albums, “Doc” saw Beefheart back on tour with a band that sounded like it had felt the rough end of the Captain’s ‘kind whip’: “make me a ‘Trout Mask’ for the modern world – or else”. The result was just that, making “Doc” one of the great Captain Beefheart records.

If there was nostalgia here, then it was for something that was yet to have its day. For a brief moment, it seemed as if the new decade was about to belong to the Captain and his avant-punk pupils like PIL and the Pop Group.

The last instalment in Beefheart’s parting trilogy, “Ice Cream For Crow” was less likeable only because it was predictable, which is not a word used often when discussing Beefheart’s work. Even a quintessentially Captain-like cut such as “Cardboard Cutout Sundown” had a whiff of familiarity about it.

Zig Zag Wanderer: The Best Of The Buddah Years

Culled from the Buddah archive, this collection draws on the “Safe As Milk” and “Mirror Man” albums, with a helping of “Strictly Personal” out takes from the “I May Be Hungry…” CD thrown in for good measure.

The first eight tracks lazily replicate those of the above title, providing an authoritative raid on “Safe As Milk”, though the presence of lesser known “Strictly Personal” out-takes in the form of “Big Black Baby Shoes”, “Moody Liz” and “Dirty Blue Gene” make it slightly more appealing.

Two eras of Virgin recordings – the mid-70s low and the comeback trilogy – sit uncomfortably on this otherwise imagi-native set, spiced up with snatches of Beefheartian wisdom and poetry between tracks. Why, even one or two of the unmentionables from “Unconditionally Guaranteed” ant “Bluejeans And Moonbeams” don’t sound so bad in this context.

A fascinating bootleg that rounds up the best of the material that got away. Includes early duets with Frank Zappa, a live performance of deep blues taped at the Avalon Ballroom, and out-takes from the first three official albums. Essential – but where’s the follow-up volume.