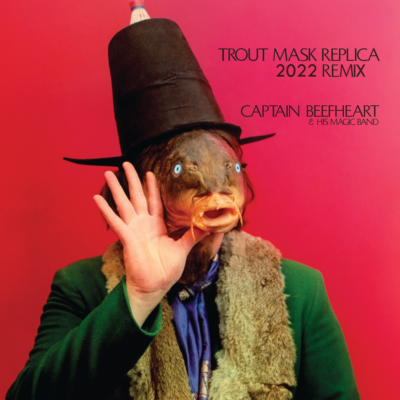 Using AI software Ant 2 Man Bee has deconstructed the Trout Mask album. He’s taken each of the songs and isolated each individual track, breaking it down so you can hear Mark’s bass, John’s drums, Bill’s guitar, Jeff’s guitar and Don’s vocals separately.

I was shocked at how good the neural net was after I tested using Sugar ‘n Spikes. While it isn’t perfect, it is still amazing how quickly the technology evolved when just a few years ago you couldn’t isolate instrumentations from whole songs without having a very good knowledge of filtering and stereo separation.

Having said that, there was still problems regarding the horns or brass. Whenever there was any of those instruments, the AI would get confused and would leak a lot of the horn frequencies between the guitar and vocal tracks, leading to some very frustrating results. In some songs like Dachau Blues I was able to easily remove the clarinet, but Pachuco Cadaver and Ant Man Bee were very difficult since they contained stereo horns which in turn it made impossible to extract without losing fidelity.

Ant 2 Man Bee has realised that as he has each track isolated he could also remix the song which is what he has done creating more ambience, greater stereo separation, lowering Don’s vocals and giving a boost to the bass and drum sound.

This is pretty impressive considering it’s created outside of a commercial studio. It makes you wonder what could be done with Trout Mask if the will was there to do the same job on it that has recently been done to the Beatles ‘Revolver’ album. But I guess it would not be financially viable. However in the meantime enjoy what Ant 2 man Bee has achieved.