The Best Of The Virgin & Liberty Years discography 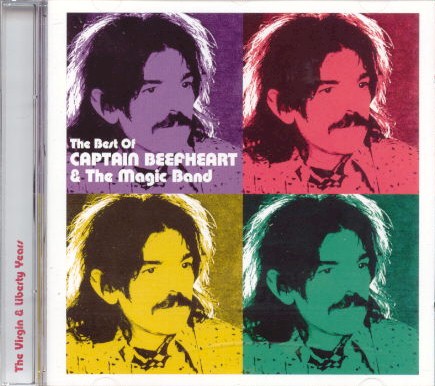 The cover says ‘The Best Of Captain Beefheart and The Magic Band’, which I think could be challenged under the Trades Descriptions Act but the disc label says ‘The Best Of The Virgin and Liberty Years’ which is a more accurate although not entirely inspiring title.

No argument about there being some great music on here.

But what an odd amalgam of material this is. Arranged chronologically, the gap in years and changes of style between the various albums represented here causes the disorienting lurch from the sublime ‘Kandy Korn’ directly into the lacklustre ‘Upon The My-O-My’ and later from the twee ‘Bluejeans And Moonbeams’ straight into ‘The Floppy Boot Stomp’. I know the two 1974 albums have been re-evaluated in recent years but, for me, they stand out like the proverbial sore thumbs here.

The album finishing on the last line from ‘Witch Doctor Life’ – “and the bones that sing of silence” – is a nice touch though.

What is going on? Well, it’s obviously EMI repackaging some of the Captain’s music and I suppose the asking price of £6.99 will be attractive to some people and maybe tempt them into buying it and discovering Don’s music. Not really an issue for Beefheart fans if you already have the original albums. And, to be honest, the best introduction to Don’s music is still the superb but more expensive ‘Dust Blows Forward…’ collection from Warners.

Come on, EMI, wouldn’t your time be better spent releasing some decent remastered and repackaged CD versions of the original albums!

One saving grace to this release are the sleeve notes by Beefheart biographer, Mike Barnes. Mike manages, within the space of one page, to write an excellent potted history of the Magic Band and somehow silently asks the question ‘how can this be a best of when all these other albums are not included?’