By: Graham
In: By or about Don Van Vliet
With: 0 Comments 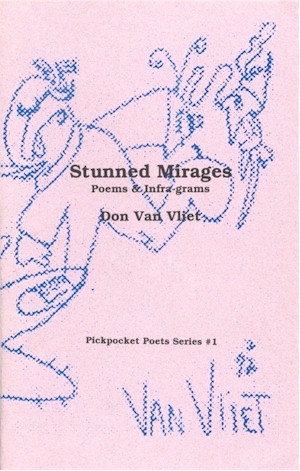 A selection of Don’s poems in a slim stapled paperback, with a separate insert which includes the cover drawing (one of Don’s) on one side and another poem, ‘Hollow Smoke’, on the other. It’s possible that not all copies have this insert.

A small note on the back of the title page states: ‘This collection is published 15 January 2000, Don Van Vliet’s fifty ninth birthday, in homage to the great Dada Americana poet.’

Apart from this and the fact it was published by the Subterraneous Archives Press there is no other information about this collection (although it does mention that #2 of the Pickpocket Series is Jack Kerouac). It is obviously not a ‘legitimate’ release but is interesting none the less.

The contents here have been published before but they have been gathered together from various sources. All are poems with the exception of ‘Seam Crooked Sam’ and ‘Odd Jobs’ which are both lyrics of songs from the, so far, unreleased ‘Original Bat Chain Puller’ album. Those poems from album covers will be instantly recognisable by most fans, some others (seven, to be exact) are also available in the glossier ‘Skeleton Breath’ book, but there are several here that had turned up alongside magazine articles which many people may not have come across before.

The compiler has done fans a service by searching these out and putting them between two covers, although the rarity of this booklet makes this endeavour slightly futile! Also, there are at least four other poems which have been missed – ‘Popplin Gas Hearts’ printed in Conjunctions and ‘Hey, Garland, I Dig Your Tweed Coat’, ‘Safe Sex Drill’ and ‘Skeleton Makes Good’ (Perhaps they had to be left out for space reasons).

One minor complaint: unfortunately the ‘One Nest Rolls’ poem has carried over the incorrect version that appeared on the cover of the ‘Mirror Man’ album – it says ‘sails’ when the correct word is ‘fails’. I only mention it because I know Don was really pissed that Buddah got it wrong, so the least we fans can do is get it right.

Good news: the publisher has contacted the Radar Station to let us know that future editions will be corrected and has sent details of how to get copies (see below). 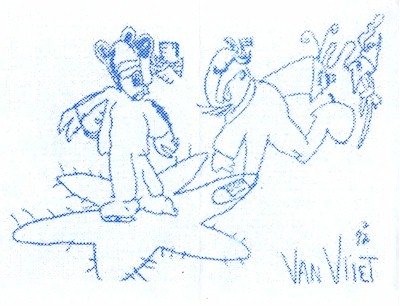 Copies of Stunned Mirages are available by mailorder for $10 + $2 shipping ($5 airmail overseas) (money orders, personal checks or cash only) from: