Some thoughts on the 2015 tour

By: Steve
In: Blog, Magic Band reunion
With: 5 Comments

Another Magic Band tour has just ended and there are still many fans across the UK with silly smiles on their faces. The band were on top form and there was a good turn out at most of the venues which is great news considering this tour nearly didn’t happen.

The first problem for the band came with Denny Walley deciding to quit so that he could follow his own musical path concentrating on the Zappa side of his repertoire. This was a big blow to the band (and us fans) as Denny’s guitar playing is something special and with no other ex-Magic Band guitarists willing to commit themselves to relearning this complex music and going out on tour we wondered if this might signal the end.

If losing Denny wasn’t bad enough in mid-2015 Mark Boston had to undergo five-way heart bypass surgery. Plans for the tour were already under way but at the time Mark thought he would be fit enough to take part. However, anyone who has had experience of heart conditions would have known that this was wishful thinking on his part. And it came as no surprise to many that Mark had to pull out of the tour.

So no Denny and now no Mark! Arrangements for the tour were well advanced and John French had the dilemma of deciding whether to cancel everything or go ahead with the tour on top of replacing two key members of the band. Some fans began muttering that they wouldn’t be going to see the band if Mark and Denny weren’t there. I could (sort of) see their point but I didn’t agree with them. Yes, it’s good to see some of the old band members but the music is bigger than any member of the Magic Band. After all, Don was forever changing the band. There have been over 40 musicians pass through the ranks of the Magic Band in its original 15 year existence. For me if John was there leading the charge with a band he had instructed then I’d be there to see them play. John carries the flame and is the one Magic Band member who is qualified for so many reasons to pass that on to other younger musicians.

Having to replace Mark and Denny gave John the opportunity to re-evaluate the band. He decided to extend the instrumentation and consequently the songs they would be able to play live. Denny’s place had been relatively easy to fill when guitarist Max Kutner volunteered to take on this awesome task. Max had recently been touring as part of The Grandmothers. Instead of directly replacing Mark with another bass player John decided to revert to one of the later configurations of the original Magic Band by including a keyboard player who would provide bass plus other embellishments in the way that John Thomas had on the Bat Chain Puller album and Eric Drew Feldman had on Shiny Beast and Doc At the Radar Station. An accomplished jazz keyboard player, Brian Havey, was invited to join the band. Existing guitarist, Eric Klerks, now an old hand, would provide some bass parts alongside his lead guitar role using an eight string guitar. The drum seat was again taken by Andy Niven. Luckily all the band members already knew each other and as they all live in Los Angeles they were able to meet up regularly to rehearse for the tour. This friendship and their obvious ease of playing together come through in the live shows.

A new incarnation of the Magic Band was born and tour dates were finalised at last but not without a lot of work on John’s part. Some venues were not receptive – shame on them! – and there were no shows in Scotland this time. 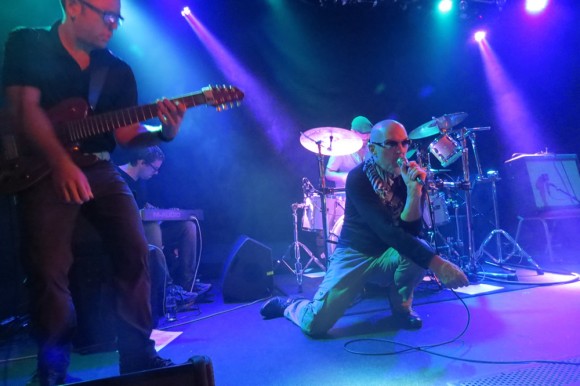 I caught up with the band at the Norwich Arts Centre (I wish I could afford to see them more than once!) which was mid way through the tour. The Arts Centre is a great little venue with the main stage in a disused church. Because of the problems to the build up to this tour as I’ve outlined above I was a little apprehensive about how things would go. However, as soon as the band crashed in with the opener, My Human Gets Me Blues, I knew that all was right in the Magic Band world.

This was followed by a solid Low Yo Yo Stuff and a bone crunching When It Blows Its Stacks. New guitarist Max Kutner getting to show off what he can do. The pace suddenly shifted as John left the stage and the band started a slower free jazz piece. What was this then? Gradually a familiar riff began to emerge and John took the mic with “White ants runnin’ Black ants crawlin'” and we were away on a wonderful rendition of Ant Man Bee, one of the new songs added to the set list this time around. Other additions included Bat Chain Puller (amazing), Tropical Hot Dog Night (seemed a bit messy due to the not so good sound system), Bellerin Plain (great ‘marimba’ embellishments by Brian Havey) and Glider (a subtle song difficult to do justice to live).

On previous tours Electricity had become quite a lengthy workout between Denny and Eric but this time around it retained its more usual compact form but with Eric now playing iPad instead of guitar – well, a theremin app on his iPad. Now that’s different!

The show took the familiar pattern of two sets with a break in the middle. The second set beginning as usual with John taking the drum seat for a solo and then a superb instrumental version of On Tomorrow. The final tune, of course, being Big Eyed Beans From Venus, with Max hitting a fine ‘lunar note’. A rousing end to a mesmerising performance. So many highlights. A great time was had by all, audience and band.

Eric Klerks has now become a senior member of the band, smiling and joking with everyone, looking very relaxed despite having to cover some bass parts alongside his lead guitar work..

Max Kutner is a bit of a showman on stage and his playing is immense. At times he seemed to be channelling Bill Harkleroad. At one point he was pushing his guitar up against his amp and I was reminded of Jeff Cotton doing the same in the small snippet of film from the 1968 Rome Pop Festival show. 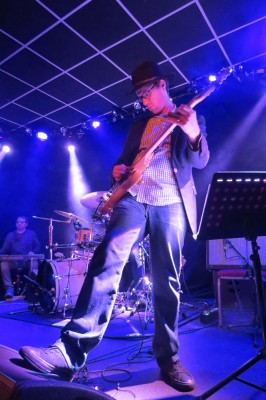 Brian Havey is a more reserved, and sits to the side with his keyboard on his lap as if he’s a busker that just happened to drop by. His keyboard bass work filled the gap well but his presence allowed for those new songs to be played and also gave some of the older favourites a little extra (the brass on ‘Hit A Man’ for example).

Andy Niven’s tight drumming is a solid foundation to the sound. He’s definitely taken on board what John has taught him.

And, of course, it all wouldn’t be possible without John French. I don’t know where he get the energy to keep doing this but I’m glad he does. He still ‘performs’ all the songs. His singing, harmonica and sax playing are always spot on. He’s happy with this band and it shows. The band have fun with the songs, they haven’t preserved them in aspic but allow them to breathe yet keep true to Don’s spirit. 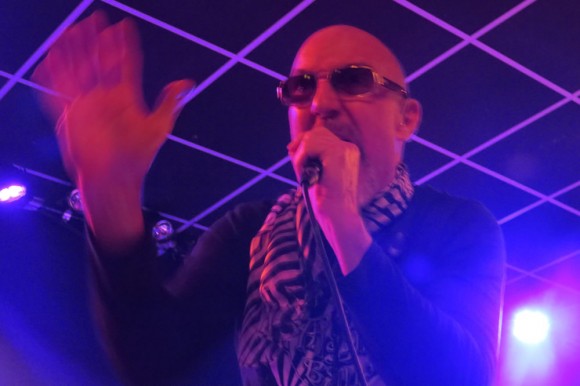 As usual the band were happy to chat to everyone during the break and after the show. Their love and passion for Beefheart’s music is obvious. And thanks to them for putting up with a lot of wild eyed old gimmers, old enough to be their fathers, button-holing them about one song or another when they probably just wanted to sit down and have a drink!

I hope they’re able to tour the UK again next year.

(Thanks to Opher Goodwin for the photos he took of the band at Brudenall Social Club, Leeds)