By: Graham
In: Life articles and interviews
Tagged: 1973, Brainpang, Encounters in the wild, Joan Lobell, Wha?
With: 1 Comment

[alert_box type=”info”]This curious oddity was a prank that first appeared in a Baltimore Maryland newspaper, The Sun, on 8th September 1973. The autographed version that you see below later appeared in an underground publication from 1985 called “DDC#040.002 #3”, published by “tENTATIVELY, a cONVENIENCE”.[/alert_box]

This was very kindly sent to me by Brainpang – many thanks to him for this bizarre curio. 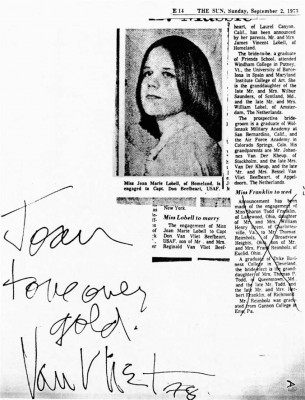 Joan Lobell is a Beefheart fan who, in 1973, thought it would be amusing to announce her engagement to none other than ‘Captain Don Van Vliet Beefheart, USAF’ in the local paper. Five years later she ended up meeting Don at a Magic Band gig and presented him with a copy of the newspaper article to sign, which, as you can see above, he did, presumerably amused / baffled at the content of the article.

This is probably one of the strangest items that I’ve ever been sent, so many thanks to Peter Warner for sending it to me, and hats off to Joan Lobell for instigating the prank in the first place.