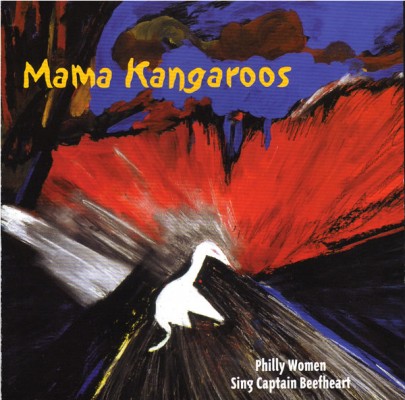 Mike Villers from Genus Records told The Radar Station about his decision to go with an all female tribute:

“…on my last project (jim carroll band tribute called
“put your tongue to the rail”), the most compelling remakes were done
by women…half of that project was women singing, and it turned out to have great energy and very interesting creatively…it definitely played a part in the inspiration for going all female with the beefheart comp…”

The Past Sure Is Tense by Winterbrief has been available as a 7″ for several years and the Janet Bressler version of I’m Glad has been released on her solo album.

A “pre-release wrap party” for the project was held on 9th March 2005 at the World Cafe Live in Philadelphia. There were performances from several of the bands on the CD plus a special solo show from Gary Lucas.

This is a collection that you will either love or hate, and I’m sure there will be people who will not be able to accept what’s happened to some of these songs. Me? I love every track. I think this is the best collection of covers of Don’s songs yet to be released. The Neon Meate Dream Of A Octafish album was good but some of the tracks tried to ‘out-weird’ Beefheart and failed.

Mama Kangaroos has taken a different approach to Don’s music. It’s obvious some thought has been put into each and every one. Instead of going for copies of the originals the bands have, in most cases, taken Don’s lyrics and set them in very different musical landscapes. There’s some excellent, and unusual, arrangements to the songs included in this collection. Here are some brief comments track by track:

Sweetie – Where There’s Woman
The first cover ever of this song? One of those overlooked songs
from Safe As Milk given a drum ‘n’ bass electronic treatment.
Strangely, it works.

Winterbrief – The Past Sure Is Tense
An electro pop version! The dark lyrics are thrown into sharp
relief by the jaunty poppy backing.

Global Transmission – Witch Doctor Life
Another electronica arrangement. A real chilled-out vibe this
time. One of my favourites

Voices of Africa – Abba Zaba
Taking John French’s African beat as a starting point this takes
it further adding vocals and guitar that also have an African
feel. The sitar though adds another eastern layer to the sound.

Jane Gilday – Sugar Bowl
A bluegrass take on this throwaway song from Unconditionally Guaranteed.
Some tongue in cheek humour here I think.

Faye Davis – Her Eyes Are A Blue Million Miles
Keeping Don’s lyrics intact means this has ‘she’ of the song being
in love with the female singer. Paean to gay love perhaps? The
arrangement doesn’t stray far from the original but I like Faye’s
voice.

Essra Mohawk – Party Of Special Things To Do
A scorching piece of southern style blues with some great slide
guitar and with fine vocals from the legendary Essra Mohawk.

Hoppy The Frog – Safe As Milk
A sax led version. Stretched out and deconstructed. Superb.

Tintinabulus – When I See A Mommy
This is slower than the original with sax and guitar taking detours
via jazz freakouts to make this the longest track on the album.
The singer has a small fragile voice which sounds like it might
be overwhelmed by the song at any moment.

Janet Bressler – I’m Glad
The tempo of the original has been speeded up to make this a bright,
catchy, summery type of song that could have been the 60s hit
that Don’s version wasn’t. Janet has a real soulful voice.

Beware The Blunted Needle – Ashtray Heart
Perhaps one of the more predictable arrangements on the album
because most covers of Ashtray Heart go for the punk approach.
However, it has some unpredictable twists and turns plus there’s
power and commitment in the performance.

Thorazine – Frying Pan
Preferred by a friend of mine because he says it’s the only real
rock and roll song on the album. Hard and fast, no messin’

Nou Ra with Interplay – Well
One of the longest tracks – just over 8 minutes – Don’s poem is
set against a shifing hypnotic background of percussion and voices
occasionally pierced by flutes, pipes and skronking sax

This album has been a long time in the making. Some proposed covers never made it, so we won’t get to hear Ella Guru or Call On Me or Blabber ‘n’ Smoke, which is a pity. Some bands have changed their names (some more than once) since the recordings began. It could so easily have fallen by the wayside but thanks to Mike Villers determination it’s now available for anyone to buy … so, what are you waiting for? Go and get one…