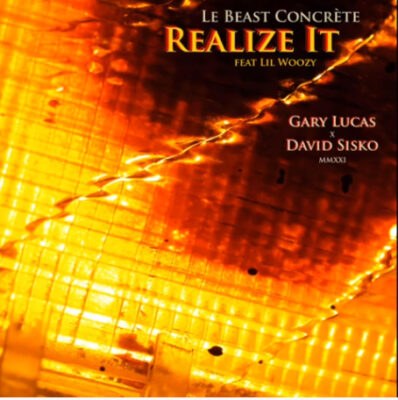 Gary continues to surprise ! You never quite know what he’s going to do next … but you always know that it’s going to be interesting.

His latest adventure – entitled Le Beast Concrete – sees him join forces with David Sisko, an NYC based producer, mixer and remixer to produce some startling and intense soundscapes. Gary’s incendiary guitar forms the centre around which swirl the electronics, beats and rhythms conjured up by David.

In the press release it’s described as “combining the elements of the past, present and the near future, it can be considered a “genre-fluid” mix blues, rock, dance, trap & the avant-garde – like none other before” …  which is about right!

The full album, Gargoyle, was released 11th August 2021 on Arena 01 Records through ONE rpm.

As a taster a single is available on streaming channels. Most of the album tracks are instrumental so Realize it with a vocal sample by Lil Woozy is slightly different but is still a fine introduction to this new music.

A second single has now been released:

Watch video of Once Upon A Time on YouTube