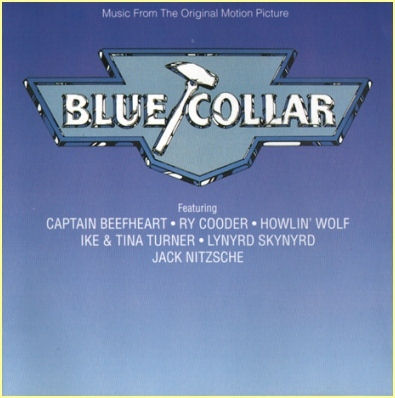 The score was composed and conducted by Jack Nitzsche which is more than enough to recommend this album.

The Beefheart tune, “Hard Workin’ Man”, appears on the compilation The Dust Blows Forward, but if you’re inclined towards getting the original albums, it’s well worthwhile in this case.

Blue Collar was the soundtrack to the movie of the same name. There is a story that Don had to be locked in a recording studio to get him to record the main track. The film features a different, ‘filthier’ version of the Beefheart tune from the one that appeared on either this soundtrack or Dust…, containing the line “Hard workin’ fucked over man” instead.

Incidentally “Hard Workin Man” also appears in the film A Civil Action starring John Travolta, though is not on the soundtrack album for that film.

Info from the sleeve

Here is a segment from the CD sleevenotes, written by Alan Robinson in June 1995, which tells the story behind Beefheart’s contribution, kindly scanned and sent by David Naughton: