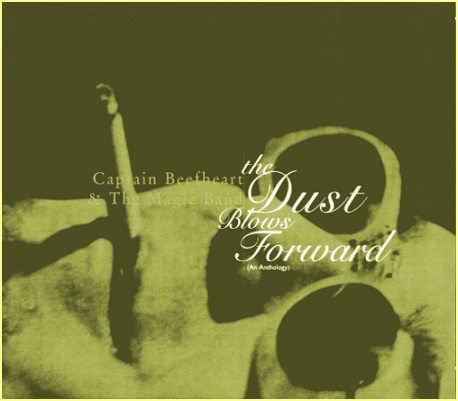 Blowing all the incomplete, shoddily thrown together and unnecessary compilations out of the water, this is the definitive Beefheart retrospective, and even contains a few rare treats for those of us who already have all the records, namely “Little Scratch” from the Clear Spot sessions, “Light Reflected Off The Oceands Of The Moon” from the ep of the same name, and “Hard Workin’ Man” from the Blue Collar soundtrack.

The notes accompanying the set are exceptional, written by Barry Alfonso they provide a concise overview of Don’s life and career. The notes on the songs included in the collection are also extremely good, providing information about the recording sessions, personnel involved and release dates.

The compilation spans the Magic Band’s whole career and would be a splendid place for the curious to venture forth.

ATTENTION PLEASE, THIS IS YOUR CAPTAIN SPEAKING

Consisting of more than 30 songs, THE DUST BLOWS FORWARD compiles all of the essential Beefheart material recorded between 1966-1982, including such songs as “Diddy Wah Diddy,” “Abba Zaba,” “Big Eyed Beans From Venus,” “Bat Chain Puller,” and “Hot Head,” among many others. Also included are several selections from the Bongo Fury album recorded with Frank Zappa, a couple of previously unreleased rarities as well as many tracks never before on CD in the USA.

Critically acclaimed and widely recognized as a major influence on a number of groups such as Talking Heads, Devo, and Pere Ubu, Beefheart and his Magic Band were as brilliant as they were strange, mixing musical genres with a deftness only they could. A Beefheart album would run the gamut from rock to blues to avant-garde jazz, offering outstanding musicianship and well-crafted lyrics. It should be noted that Beefheart’s Trout Mask Replica often places in many critic’s Top Rock Albums Of All Time lists.

In his liner notes for the package, writer Barry Alfonso describes Captain Beefheart like this: “There never has been a creature quite like him, aquatic or otherwise. You’d be hard pressed to find a body of work as challenging and stubbornly idiosyncratic as the recordings Beefheart-aka Don Van Vliet-releases in tandem with his backup group, the Magic Band.

Defying easy reference points, his music was at once primal and complex, otherworldly and earthy, beguilingly absurd and unnervingly violent.

Critics at various times found links with Delta blues, free jazz, and modern classical composers like Igor Stravinsky and Charles Ives; as a lyricist, his pun-laden, dazzlingly visual verse was compared with the works of the Dadaist and Surrealist poets.”

Born Don Van Vliet January 15, 1941, in Glendale, California, Captain Beefheart (an alias he assumed in the mid-’60s) spent much of his youth sculpting with clay. In the mid-’50s his family moved to the Southern California desert – after denying him the opportunity to take advantage of a European art school scholarship. While in the Mojave, Beefheart taught himself to play music, and eventually met up with Frank Zappa, a true kindred spirit and sometime collaborator. In 1964 Beefheart joined with the Magic Band and began his recording career. While never realizing huge chart or financial success, Beefheart was always a favorite of the rock journalism community and was as powerful a cult rock figure as has ever existed. Beefheart ceased recording and touring in theearly ’80s to devote himself entirely to painting and drawing, which is what he does today.