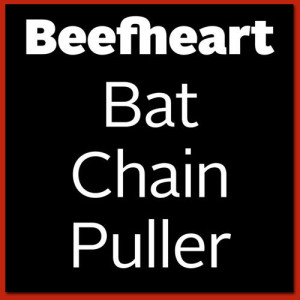 It turns out that The Dust DOES Blow Forward ‘n The Dust DOES Blow Back. As Don would say “That’s incredible.” Incredible that we get to release this directly from the Vault to you. This, being the Original and Definitive Issue of Bat Chain Puller. Approximately 1 hour of music that no one in the history of life on earth has ever been able to describe adequately. All original tracks plus 16 minutes of fabulous bonus material. It IS incredible. Also tapered. With liner notes by Music Director John French aka “Drumbo” and Denny “Feelers Reebo” Walley.

This album was recorded back in 1976. Don and the band had just come off a relatively successful come back tour of Europe and the US and were given the opportunity to record an album by Frank Zappa … or so we thought. It is now clear that Frank wasn’t aware of his money being spent on this and other things by Herb Cohen!.

Bruce Fowler and Elliot Ingber from the touring band were not available for the recording so the band became:

A tape of the album (before production on it had been finished) was sent to Virgin Records in the UK to see if they were interested in releasing it. Unfortunately it got caught up in the legal wrangle that Zappa was having with Herb Cohen so the deal fell through.

But tapes of the album had already been sent out to reviewers and radio stations. It wasn’t long before one or several of these found their way onto bootleg vinyl and eventually CD.

Take a look at the bootleg releases of Bat Chain Puller

Since 1976 the tapes have languished in the Zappa Family Vaults. It seemed unlikely they would ever be released – it was said Don refused his permission or the ZFT said it wasn’t viable to put it out. But then Gail started to hint that a release was possible. Early 2011 looked likely but Don’s death seemed to put pay to that plan. It was then announced for 15 January 2012 … but got delayed until 13 February.

Where to start with this?

Having waited so long for an official release it would have been so easy for this to have been an anticlimax. It certainly isn’t … it’s a triumph … and an essential Captain Beefheart album.

Listening to this album is like meeting an old friend … but the years have been very kind to this particular friend.

The sound, of course, is much brighter than the bootlegs, all the detail of the instruments and Don’s voice can be heard. Also, overall BCP has a warmer rounder sound rather than the dry two-dimensional feel of some of the other albums.

What I found striking was the quality of Don’s voice … it transported me back nearly 40 years listening to him back then … there are depths and nuances still there that he seemed to lose on the later albums. I felt my eyes moistening.

It plunges straight in with the title song – Bat Chain Puller. Still a staggering achievement after all these years it fairly careers along “its slick smooth trunk that trails behind on tracks, and thumps”.

Next up is Seam Crooked Sam, a new kid on the block we’ve met before but with a great story driven by a keyboard guitar backing dance.

Followed by Harry and Irene which swings like a mother and knocks the spots off the Shiny Beast version.

81 Poop Hatch is the same recording, just much clearer. And Flavor Bud Living is the version Don later berated as ‘too religious’ … I have to disagree. Yes, it’s not played according to the exploding note principle but why didn’t he change it if it bothered him! It’s a beautiful gem of an instrumental as is Ah Carrot Is As Close.

Brickbats, the raucous track from Doc at the Radar Station is here mellower and more measured even though Don’s sax is more prominent and his voice could be an outtake from Trout Mask…

And the Floppy Boot Stomped down …. Don whispering in your ear and declaiming like a preacher … “and the hotlick kicked, and the fire leaped an’ licked and hell was an ice cube melting off on the ground” … ah man, that’s so heavy!

I’ve always loved Owed T’Alex … still do (even more) but here it was made for Denny Walley’s sweet guitar … it fades far too soon … I’m still puttin’ out to Carson City.

What’s this now … the fascinating, magical Odd Jobs with his formaheap … a sad story well recited and sung by Don with a lengthy rolling instrumental coda that’s sure to get your feet tapping … if not getting you up to dance! Why was this never redone for a later album?

Human Totem Pole is another which is better than the later version. Don’s lyrics succinctly relate the human condition and he nails them with the band gurglin’ and googlin’ behind him tick tock tick tock…

The original album is closed with Apes Ma … again, like Poop Hatch this is the same version as used later.

Not only do we get all those wonderful tracks but there’s some bonus songs too. A later remix of Bat Chain Puller which is not a lot different from the original version or maybe I’ve just not listened to it enough. Candle Mambo is a treat … starting off with Don’s jokey piratical “avast me hearties” (!!??) it’s one of his softer songs that is as good as the Shiny Beast version.

Then, finally, we have an eight minute Hobo-Ism. Denny Walley relates in the cover notes how this improvised song came to be recorded and was almost released. Train song, murder ballad, paen to the hobo life it is a marvel. Athough the song has been bootlegged countless times this seems to be a different version to that on bootlegs but Denny doesn’t mention it being recorded more than once … quality Don!

However it didn’t get the release in 1976 as intended and so it would be another two years before there was another Beefheart album released. Although it reworked a number of the original BCP songs Shiny Beast had a different Magic Band and an overall different feel to it … harder and shinier. How different would things have been subsequently if BCP had come out in late 1976/early 77 at the height of the punk movement, who knows?

Even though it didn’t get a release Don and the band were still out there touring and playing some fine shows judging by the stealth recordings available from the 1976/77 period.

What made many of those live shows stand out and gives BCP an extra quality is Denny Walley’s fine guitar work. It’s a mellow yet hard-edged bluesy sound that suits Don’s music so well. With this release, at last Denny gets some recognition for his work with the Magic Band as this is the only offical recording he did with them.

John French’s drumming is as precise and sympathetic as ever, John Thomas’ keyboards fit well with the feel of the album and Moris Tepper doesn’t fall too far under the shadow of Denny’s lead. The band serve Don well … and Don is on top form.

Dump all those cruddy bootleg versions … get this … you know it makes sense.

Apart from the great music the packaging also contains an excellent booklet which features a previously unseen photo of Don (shared by Gail Zappa) and two new drawings of his … one of which illustrates Hobo-Ism. Not only that there are fascinating pieces written by John French and DennyWalley detailing the history surrounding the recording and non-release of the album, plus poignant addenda of their thoughts on hearing of Don’s death. Finally Gail Zappa has added two of her personal recollections of Don which can only further reinforce the mystique around him.

However the packaging is a bit of a curate’s egg! As I’ve just said the contents are excellent and well worth getting … and the cover itself does look good. But why is it labelled ‘Beefheart’ only, with no mention of the Magic Band? The design is a bit literal with a preponderance of bats, a chain and the word ‘pull’. And did anyone else have problems getting the booklet back in the slipcase … mildly infuriating?!

I’m sure Don would have approved of the crow on the disc though.

Throw your leg over baby n uh get this here rhythm…

As you may have read above I noted that the version of Hobo-Ism here is different to the one that had circulated on bootlegs. On closer listening it didn’t seem to be of such good sound quality either. I decided that if I got the chance I’d ask Denny about this. So after the last gig of their March 2012 tour (at The Duchess in York) I did just that …

I was surprised at his response. He confirmed it is a different recording but it’s NOT him playing on it and he doesn’t know the origin of this version. Obviously Don recorded it again at some point … but with whom and why?

Denny is understandably very upset about this … he’s been waiting over 30 years to get the track released and now it’s done the ZFT have botched it. He’s hoping that they will try to sort something out .. if we hear anything we’ll let you know.

On the positive side, we fans have now, inadvertently, been gifted a previously unknown and unheard Beefheart recording!

Denny has ‘fessed up to the playing on Hoboism! However, he’s not happy with his playing nor with Don mangling the lyrics. But this attempt at recording the song seems to have been done at the wrong end of a bottle of tequila … which explains a lot!

The correct take of Hoboism in all its glory has been made available as part of the downloadable version of BCP on iTunes.