Zappa and the Captain Cook by Steve Weitzman

[alert_box type=”info”]This article appeared in the 3rd July 1975 edition of Rolling Stone magazine. Many thanks to Mikael Djurvall for sending along the excellent photograph.[/alert_box] 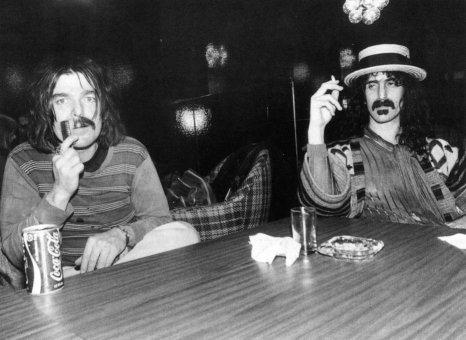 PASSAIC, NEW JERSEY – Captain Beefheart, rock’s sometime genius, had just finished a show with Frank Zappa, with whom he’s touring after the end of their longtime feud. Slumped backstage at the Capitol Theatre, he scratched his shaggy head and slowly related the latest bizarre turn in his odd life.

“I said some silly things,” Beefheart noted, “because I’m a spoiled brat and I don’t understand business to the degree that Frank does. I probably felt neglected. I’ll admit it… and I told him so. I said, ‘I’m sorry Frank and I don’t mean that for an excuse.’ We shook hands and that was that.”

Zappa and Beefheart’s relationship goes back 20 years, to when they attended junior high school together in Lancaster, California. “I was there when he picked up his first guitar,” Beefheart recalled. “It was a funny little brown thing with hardly any strings, but it sure sounded good to me.” The two tried unsuccessfully in 1964 to form a group called the Soots, and then went their separate ways – Zappa to form the Mothers, Beefheart to search for his Magic Band.

The problems began in 1969 when Beefheart did Trout Mask Replica for Zappa’s Straight Records. “I did Lick My Decals Off, Baby right after Trout Mask. The group wanted to be commercial and since they were so nice about doing those two I thought I owed them a moral obligation and I stayed. But I should have gotten rid of them then.”

Beefheart added that his last two albums, Unconditionally Guaranteed and Bluejeans and Moonbeants were “horrible and vulgar,” and that he’d “headed for the redwoods to paint and write” as soon as he’d fulfilled his obligation to Mercury.

But other stories have Beefheart accusing Zappa of poor production on Trout Mask and interfering with its creativity. In 1972, Beefheart told the New Musical Express: “Zappa is an oaf. All he wanted to do was make me into a horrible freak . . . Zappa made me look out of the question, and the kids out there on the streets started to take dope because they thought that was the only way they could possibly get into my music. It was disgusting and totally degrading that Zappa should do this to me.”

Evidently, Beefheart had second thoughts in the woods, and he called Zappa to praise Apostrophe and “just to say hello.”

“He apologised for all the garbagio and asked for a job,” Zappa said. “The Captain repented. He had been real confused.”

Beefheart auditioned just before Halloween, Zappa continued. “He flunked. See, he had a problem with rhythm, and we were very rhythm oriented. Things have to happen on the beat. I had him come up on the bandstand at our rehearsal hall and try to sing ‘Willie the Pimp’ and he couldn’t get through it. I figured if he couldn’t get through that, I didn’t stand much of a chance in teaching him the other stuff.”

Zappa and Beefheart tried again this spring. “Although he still has trouble remembering words and making things happen on the beat,” Zappa said, “he’s better. Just before the tour, I tried him again and he squeaked by.”

Beefheart’s major contribution to the present Zappa show involves growling the lead vocals on “Poofter’s Froth, Wyoming” (which Zappa wrote for him), “Orange Claw Hammer” (from Trout Mask) and “Willie the Pimp,” the show stopper. Remembering the lyrics had apparently been a problem for Beefheart – he keeps them written down on a stand located at his feet onstage. Zappa is interested in getting Beefheart “to relax to the point where he can improvise words. He can do really funny stuff when he’s sitting around in a room. But he hasn’t really gotten comfortable enough yet.”

At this point, Zappa plans to remix and reissue Trout Mask, which Beefheart still describes as “my favourite.” Beefheart said he’s “had an extreme amount of fun on this tour. They move awfully fast. I’ve never travelled this fast. With the Magic Band – turtles all the way down.

“Frank is probably the most creative person on this planet. He writes things for instruments that haven’t even been invented.” Beefheart paused for a moment and then resumed. “He’s another Harry Partch,” he said, referring to the avant-garde composer, “only he hasn’t dried up yet. Get it?”