By: Graham
In: Life
With: 0 Comments 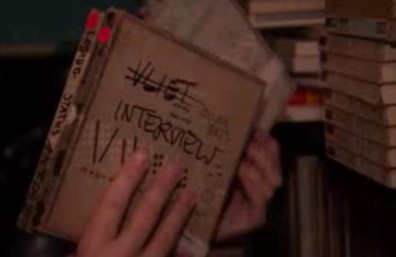 A video tour of Frank Zappa’s hoard of audio, film and video treasures has been made available at YouTube. Bearing a marked similarity to bonus material on the Frank Zappa – Classic Albums – Apostrophe And Over-Nite Sensation release, this tantalising tease of a film shows only the packaging and the formats of the recordings, not the contents.

At about four minutes in, the presenter casually flicks his wrist to reveal a package apparently entitled Vliet Interview.

Closer inspection however reveals that the word Vliet has been scored out, and in a seemingly different hand the word Interview has been inserted. Later in the film you can see documents relating to the Trout Mask Replica master tape.

Maybe The Zappa Archive does contain all sorts of Don Van Vliet wonderment and Captain Beefheart rarities. Maybe the original Bat Chain Puller will one day be released by The Zappa Family Trust. Maybe one day Brickbats will fly at my fireplace.

Thanks to Peter Warner for his detective work.