Through The Eyes Of Magic – finally! 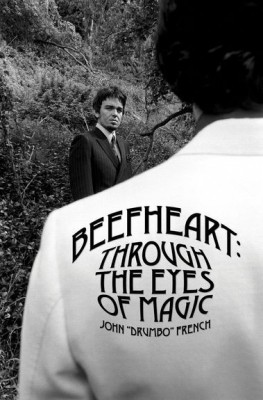 The following press release about the publication of John’s long awaited book has just come to our notice:

John “Drumbo” French: Beefheart: Through The Eyes Of Magic

The ultimate book about Captain Beefheart written by the man who spent more time with him than most.

880 pages, including 16 pages of amazing photographs, many published for the first time.

Includes reminiscences from key members of The Magic Band and The Mothers Of Invention.

Few names carry such formidable mystique and rabid cult status as Captain Beefheart, who led various lineups of his Magic Band to make some of the most startling, ground-breaking albums of the last century. In 1982, he retired to concentrate on painting, leaving the mythology he’d stoked himself to grow untamed over the years.

John French is better qualified than anyone to talk about Beefheart, joining the Magic Band in 1966 at the age of 17 just before recording their *Safe As Milk *debut album, finding himself plunged into a tyrannical regime which would dominate his life for the next 14 years as he played a major role in eight subsequent albums, including translating the mindblowing avant-blues assault of 1969’s *Trout Mask Replica *into readable music for the Magic Band from the Captain’s piano poundings under torturous conditions he likens to a cult.

Spanning nearly a thousand pages, French’s remarkable memoir starts with a vivid description of the rarely-documented early 60s Lancaster garage-rock scene which also spawned names like Ry Cooder and Beefheart’s childhood friend and later nemesis Frank Zappa, whose appearances in the book will enthrall his own legion of fans. As his spellbinding, often shocking tale unwinds, he encounters names including jazz giant Ornette Coleman, Jim Morrison and Paul McCartney, writing with dry, sometimes surreal humour and disarming honesty about his old boss and even himself, occasionally bringing in his old Magic Band comrades to jog his memory. The book is packed with new revelations, many previously-unseen photos and enough anecdotes to keep the Beefheart faithful ruminating for years, French finally crystallising and bringing to life over 40 years of legend and speculation in what has to be the ultimate book on the mercurial genius of Captain Beefheart.

Also check out John’s blog for some more tantalising extracts.