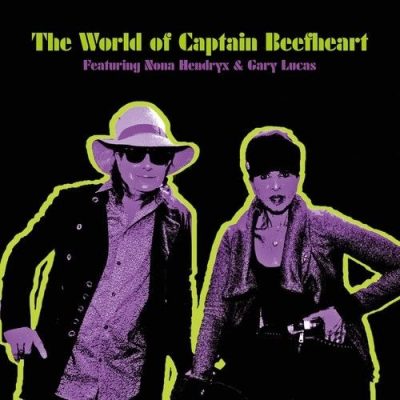 The World of Captain Beefheart strikes a fine balance between the more bluesy and groove-accessible songs in the good Captain’s oeuvre and the more extreme, darker and weirder side.

You will probably already be aware of the World of Beefheart banner that Gary Lucas has played under before with ex-Labelle vocalist Nona Hendryx. Most notably at an Amsterdam concert in 2012 with the Metropole Orchestra. However for this CD the pair have dispensed with the orchestra and instead are ably backed by Jesse Krakow on bass and Richard Dworkin on drums, from Gary’s Fast ‘N Bulbous connection, and keyboardist Jordan Shapiro from his Gods and Monsters band.

It’s always interesting to hear how Gary interprets Don’s work and with Beefheart fan Nona on vocals you know it’s going to be an fascinating ride. The choice of songs which ranges across several of Don’s albums, includes some obvious ones playing to Nona’s vocal strengths and some less obvious ones which stretch her singing.

Nona excels on the ballads, My Head Is My Only House, I’m Glad and Too Much Time accentuating the soulful elements of these more mainstream of Don’s songs particularly when joined by Jordan Shapiro’s keyboards. Vocally the least successful are Sugar ‘N’ Spikes and Big Joan, the latter also suffers from a somewhat chaotic backing at times. However Sun Zoom Spark, When Blows Its Stacks and Tropical Hot Dog Night work really well.

There are no radical new arrangements of the songs here but these old favourites crackle with a new energy and they sparkle with the intensity of the tight performances. Gary stretches out on guitar now and again (Smithsonian Institute Blues, When It Blows Its Stacks) and Jordan’s shimmering keyboard work adds an interesting new dimension to some of the songs (Suction Prints, I’m Glad) while Jesse and Richard provide a solid backing throughout.

This is probably not to every fan’s taste but if you like to hear different interpretations of Don’s songs then this is well worth a listen.