Following on from his involvement with the Magic Band reunion, Fast ‘n’ Bulbous and the series of Symposia Gary Lucas continues his celebration of Don’s music with his latest project “The World of Captain Beefheart”.

This is based on the show of the same name performed featuring Nona Hendryx (LaBelle, Talking Heads) and several Dutch singers at Amsterdam’s Paradiso in February 2013 with the 65 -piece Metropole Orchestra, which was produced by Dutch radio presenter and Beefheart fan, Co de Kloet. 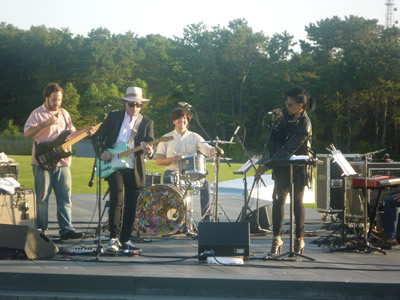 All the musicians involved in the new project – Gary Lucas, Nona Hendryx, Jesse Krakow, Eric Slick and Jordan Shapiro –  have busy schedules so they will not be taking the new show out on the road until 2014. But as a trial run they performed on 15 August at a private party at The Bridge, a private golf club belonging to Gary’s old friend Bob Rubin, a huge Beefheart fan who was with him the night he saw Don’s first show in NYC at Ungano’s in early 1971 while a student at Yale.

Some videos of the band’s debut at the Bridge can be found here: