The Abba to Zappa Of Captain Beefheart compiled by Jeff Watts

By: Graham
In: By or about Don Van Vliet
Tagged: Jeff Watts, Ozit
With: 0 Comments 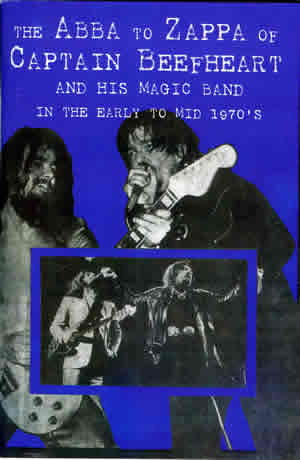 The cover may look familiar, which is not surprising because this is pretty much a straight copy of the first edition of the Lives & Times booklet. It’s smaller (about 6″ x 9″), with a glossy cover.

Apparently it is a ‘limited addition’ (sic).

A few extras have been added. There are four pages on Zappa inserted in the middle of the book (two pages from the Zappa Reprise press statement of 1971 or thereabouts, a cartoon, and a bad drawing). There are a few extra pages inserted of photos, flyers, ticket stubs etc.

The book’s new title is presumably to cover for the fact that Ozit couldn’t be bothered to update the original … the discography is the same as the original, ie only up to 1976.

The quality of reproduction isn’t too bad on the whole, assuming they”ve taken it from the original book (I find it very hard to believe they’ve located all the original materials and assembled them in exactly the same order!).

Finally, the book is credited ‘assembled together by the writer Jeff Watts’. What John Muir and David Britton (the original compilers) would make of this I’m not sure…

Overall, another shoddy production from those Ozit people! A missed opportunity to either make a rare item available again in an honest fashion or to produce an updated version of this booklet.