The Safe As Milk Acetate

By: Steve
In: Uncategorized
Tagged: 1967, Acetate, Safe As Milk
With: 0 Comments

One of those real collectors’ items for the Beefheart fan. 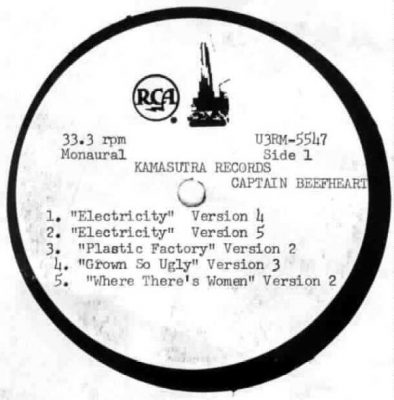 At some point during the recording of Safe As Milk, an acetate was pressed with various versions of some of the album’s songs. Was it for the band or the producers .. or someone else? Were these tracks seen as the (almost) finished versions and committing them to disc was one way of helping make that decision? I guess that’s something we’ll not know for certain.

Acetates can sometimes be the source of fascinating alternate takes of well known songs, showing works in progress, alternate lyrics or different arrangements. However in this case there is nothing radically different from the tracks that would appear on the released album.

The only song with more than one version on here is Electricity (versions 4 and 5 … although I’d love to hear the first three versions!). Both versions here are very like the final track , there are only the slightest differences. Autumn’s Child is the only other track that is significantly different being ten seconds shorter, so was still a work in progress. It’s very difficult to spot any real differences between these and the finished product, especially listening through some of the distortion due to the vinyl layer on the acetate wearing out.

One thing that is most obviously different to me is the bass sound. It’s much more solid and prominent than on the original released album. It particularly stands out on the version of Sure Nuff ‘N’ Yes I Do which might, just possibly, be a slightly different take to that on the album.

As can be seen the acetate has an RCA label … because it was recorded at the 4-track RCA Studio … but it’s for Kama Sutra Records who had signed the Beefheart band and would release the debut album on their new Buddah subsidiary label and these are the original mono recordings.