The sound of Safe As Milk 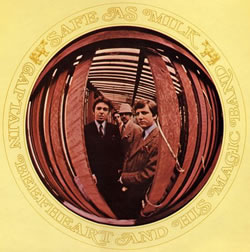 The sound quality of Safe As Milk is something that has been discussed in one way or another quite a bit over the years. Why does it sound the way it does and which release is the best version available?

Some (but not all) of the issues can be traced back to the way the album was recorded in the first place.

Ry Cooder and Gary Marker have both been critical about the way Bob Krasnow and Richard Perry took the recording out the superior eight track Sunset Sound Studios and moved it to the four track RCA Studios to the detriment of the overall sound of the album.

Gary Marker speaking to John Platt in 1999 for remastered Safe As Milk booklet:

Several basic tracks and a number of overdubs were done at Sunset Sound on what was then state-of-the-art 8-track. Perry reduced the 8-tracks down to 4-tracks and moved the entire operation down the street to a really inferior studio – RCA’s by-the-skin-of-our-teeth operation. According to  Krasnow,  “Well, Richard was getting really confused with all those tracks. He’s more comfortable with 4-track.”

Many fans proclaim the original 1967 US mono album as the best sounding pressing out there, and are dismissive of the other mono and stereo versions that were released.

The only vinyl pressing of Safe As Milk to use the original mono mix is the original US red label, and, as with all RCA-distributed product from this time period, this included any foreign pressing made from the same stampers (usually countries that can’t cut their own stampers, such as Puerto Rico and some South American countries).

For some reason it was RCA policy to ship a stereo mix overseas, which would then be folded down and released in mono. So all overseas pressings (not made from US stampers) are fold-downs and not genuine mono. This would include the UK Pye release.

The only simultaneous European issue is the poorly pressed British mono only on Pye […] In those days, unmixed tapes were sent overseas and each country created its own mix. Each of the foreign mixes is superior to the slightly muddy US press; surprisingly, the best is a German 1976 reissue, Gold Rock, which reveals the instrumental details in exciting clarity.

In 1971, the album was reissued using a defective stereo master with various serious problems. All CD issues until the remaster from 1999 used either this defective stereo reissue tape or a fold-down.

Unfortunately copies of the original red label US mono album come onto the market infrequently and consequently command high prices. Which means many fans have, sadly, not actually heard what is claimed to be the best sounding version of the album. 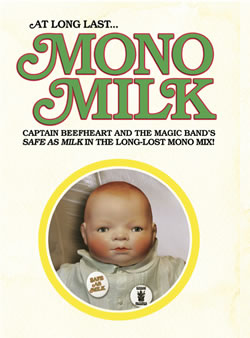 Then in 2013 there was a ripple of anticipation throughout the world of Beefheart fans when Sundazed announced the release of Mono Milk which claimed:

With producer Richard Perry’s rare original mono mix restored, this is the definitive edition of one of rock’s most dynamic debuts!

And, sure nuff, this did sound pretty darn good. Overall the sound was clearer, more solid and packed a bit more of a punch. But someone with very sharp hearing noticed something that wasn’t quite right – the end of Electricity matched the stereo mix, which is totally different to the mono mix. So how could this be the original mono mix? Intrigued, this led to one intrepid audiophile doing a spectrum analysis of the Sundazed ‘Mono’ version and comparing it with other pressings. His findings revealed this:

In other words, according to the above findings, the version by Sundazed appears to be a hybrid of the original US mono mix and (a re-creation of) the foreign fold-down mix, and largely taken from vinyl. This means that it seems not to be a straightforward release of the original mono mix tapes that everyone was expecting. Bizarre … make of that what you will!

So to summarise, if you want to hear the original versions these are the ones you need to check out:

Thanks go to the fan who sent this information about the Mono Milk release to the Radar Station. You know who you are.